Well it's finally time to get back into modeling and since I'm committed to the "Well Done" GB, I had better get my backside into gear.

And depending on the size of the base and how big the field kitchen is once built, I may add the
. Tamiya "German Soldiers with Bicycles" #35240
. with the LionRoar photoetch bicycle update set LE35065.

I probably won't use all of the figures from the MiniArt set and if I do use the bicycle kit, then I'll only use one of the two.

Should be a pretty straight forward and simple build with a basic kit and some figures... nice relaxing way to get back in to modelling.

Mandatory pre-build pictures to come as soon at the battery has recharged for my camera! :angry:
K

if possible and if available, check out preiser's infantry at rest! the figures aren't of sublime quality but the poses are really good and most probably of use for you!
T At this stage, I plan to use the entire Field Kitchen set and figures for it. The two MiniArt figures in the centre (the one washing his hands and the one pouring the water) as I think they will go nicely with/at the well... I may use the seated Officer and depending on space, the walking soldier with bicycle with the bicycle updated with the photoetch set.

A lot of work needs to be done on the base. The plaster cobblestone street is basic but functional. Most of the work will be needed around the sidewalk under the well, which is currently just three additional plaster cobblestone pieces that come with the Firestorm base. I don't like how everything looks "square" with the wooden base (first rule of dioramas - use angles and don't have things line up), but putting the well on the diagonal works nicely.

The kitchen will fill the street area on the left, the two MiniArt figures will be at the left of the well. Maybe the seated officer on the right hand side of the well, and the walking soldier with the bicycle in the lower right of the street.

Also plan to add some odds and sods from other add-on sets like crates and baskets with food....

Nice pieces for the well !!!

Looks like you're on your way to a cool set up .

Staff member
Very cool idea!! I look forward to seeing it come together.

Hurray! john's in the game-

Step 1.... assembly... needs more cleanup work on those nasty seams all over the wheels... doesn't it feel good to sniff some glue again?

great to see that you started john!
T

In a way it was good fortune that this build was delayed due to me working on the Quarterscale or Smaller Madness GB... I wasn't really happy with the plaster base that I had since it really didn't have much detail. The other day I went to one of my LHS and low and behold they had a whole lot of new MiniArt diorama bases in and they had this one - 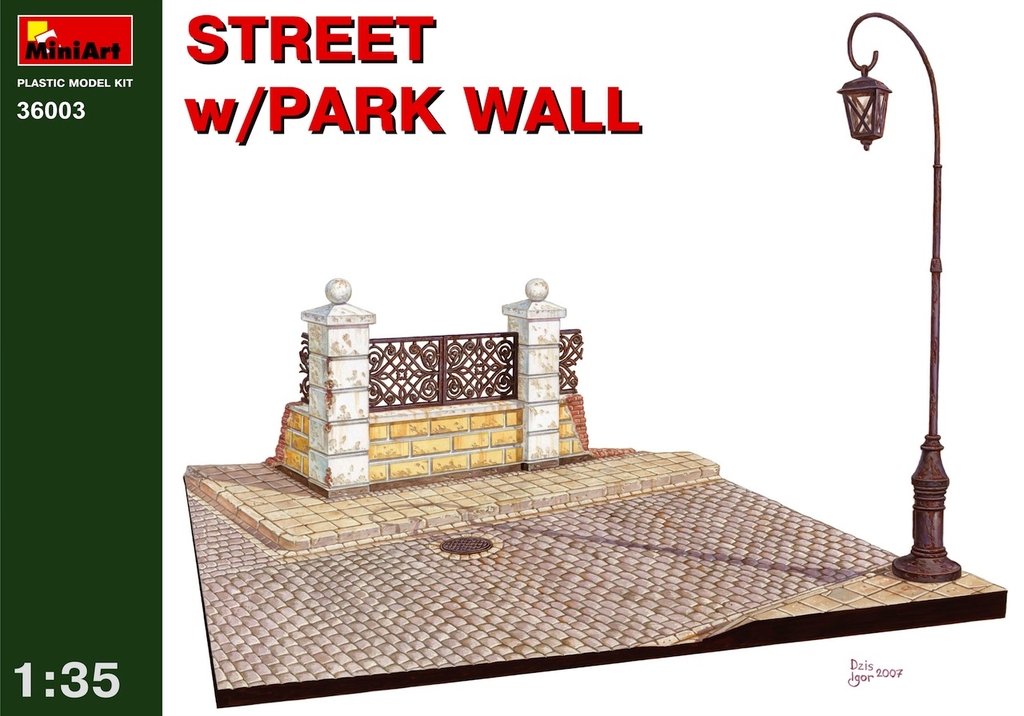 It has a lot more detail along with the street lamp and the wall. I'll need to do some work and move the wall a bit, so that I can fit the well at the street corner, but it should work and hopefully provide a better diorama base.

Staff member
Well there goes my plan....I got the same thing. You go John! I wasn't real sure what to do with this since I have never worked with this type of stuff before. Think I'm going to do another route.
C

Looks like a great plan, Trax- coolio! Hmmm- I think I'll recreate something like your original plaster base with foamcore.
T

moon puppy said:
Well there goes my plan....I got the same thing. You go John! I wasn't real sure what to do with this since I have never worked with this type of stuff before. Think I'm going to do another route.
Click to expand...

Sorry about the MP.... Didn't mean to steal your thunder for your idea.

I have a number of these MiniART diorama bases in my stash but haven't had a chance to build any yet. They all look pretty good - especially some of the larger more complex bases with buildings. I much prefer working with plastic... plaster bases are ok but tend to lack much detail and I detest working with resin.

Staff member
Can't promise I want go ahead with what I got after seeing what you do John, have it it mate!
T

Here's the basic layout on the new diorama base - Staff member
Hey John just a general question about these types of bases, do you put anything under the base for support?
T

moon puppy said:
Hey John just a general question about these types of bases, do you put anything under the base for support?
Click to expand...

This one isn't too bad given it's a smaller size and I won't have much weight on it (just figures and the cart). It probably wouldn't hurt to have a bit of support in the centre just to ensure it doesn't sag.

Certainly, on the larger diorama bases, support would be needed. I also put these on a wooden base anyhow.