After finish the Fiat CR.42 and two Hurricanes I saw that I was neglected the Korean section . In order to compensate status of individual thematic blocks I decided to do something from the "RED" forces - becouse the MiG-15 will be built together with the some of UN forces "jet" choice was very easy - IL-10 from DPRK or the PRC aviation.

Model will be built "directly from the box' standard, unfortunately for my "desperation" some of parts has been prepared by SH as a photoetched or resin.

The first fitting confirmed my worries - IL-10 is the first and the last model stamped by SH which I knowingly bought - I do not know why these models cost so much as their quality is so lousy...

Fitting on the underside looks a little better:

Fuselage halves vary in length, a different shape and thickness:

Fitting the parts forming the wing is also not too accurate:

I scary to think what still awaits...

I've wanted to get one of those.......so it will be interesting to see your build.

A couple of things, it may just be the pictures, but it looks to me like the right fuselage is warped a bit to the left which would account for it appearing to be a bit shorter, and also it appears that the left fuselage opening at the front is warped making the diameter of the opening a bit smaller. The lower wing seems to have a bit of an anhedral which might account for the gaps at the wings.

Yipes ! That's a special hobby ? That made me cringe as I have some awaiting me.

I hope you succeed with this build as it is a subject that you don't see a lot of. Good luck !

Looks like a challenge Hubert, you going to take it on?
M

yeah looks like sanding and filling ... erm the other was round, but hex it will be gun
D

Battle of "Beast" has begun...

First blood in the Battle of the Beast - cockpit...

The stitching on the gunner's seat looks REAL good!

The main body is assembled together. I had some "fun" (nerve) for setting the proper wings elevation, but it came out pretty decent. I am glad that the Revell adhesive does not bind too hasty Now it's time for the putty and sanding tool kit.

Photos are not the best - I did not want to putting up the "entire grip". And when I was viewing images on a PC I remembered that on the lens is still half-filter that I was used a few days ago in the mountains ...

Il finally been puttied and polished. Filling was required three steps: Tamiya gray putty in the two approaches, and finally filling Surfacer 500th. Canopy masked, "plaque" glued - only deal with the gunner position and it can be painted :woohoo:

Slowly, but perseveringly forward - the first painting of of the model is done​​, the next will be retouching, varnish, decals and wash... 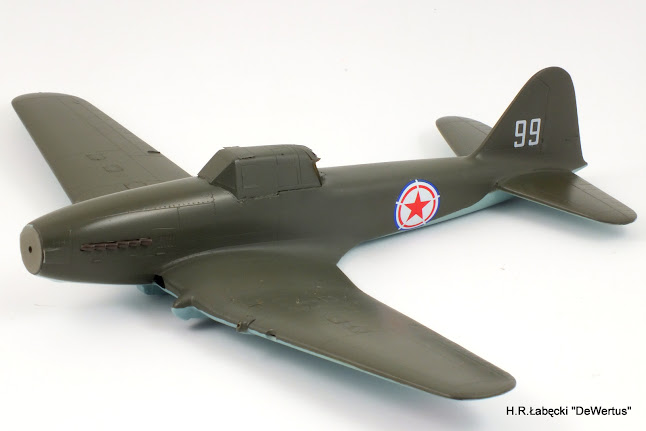 Although the model as more and more becoming similar to completed, when I peeked in to the box I can't believe how much there is yet to parts a palette of ...

Wash, soiling, scratches and exhaust fumes are made ​​- now is time to assembly the rest of "smallware"...