THE DRAGON AND THE WOLF

Hello Maer's,
as listed 'way back when', in my Masters intro, this diorama is my favorite of my collection. The strange thing is that i have never got around to posting it here. So I apologize for those have seen this one too many times, but I thought that it was overdue to get an appearance in my little corner of MA.
Actually I had promised Bob L ages ago that I would post this but just haven't got around to doing it!
Anyway there's stacks of pics so I hope you enjoy looking, but please keep in mind that this is starting to get 'Long in the tooth' as I built this one in 1999-2000.

THE STORY
I/35 Scale
Basically this is a dio of a Dragon Wagon in Nov. - early Dec. 1944, being used to clean up a forward airfield full of 'left behind fighters by JG 300. The USAF want the airfield cleared for their Mustangs to run sorties into western Germany. The figure walking and reaching for his pistol has heard a noise and is making his way back to check, while his partner just wants to go and have lunch. Lurking behind the trailer is a lone German soldier who has been cut -off from his unit, a fanatic.
What will be next????
The paint is base coated acrylic Tamiya with all detailing and color depth work done in atrists oils (including the mud). 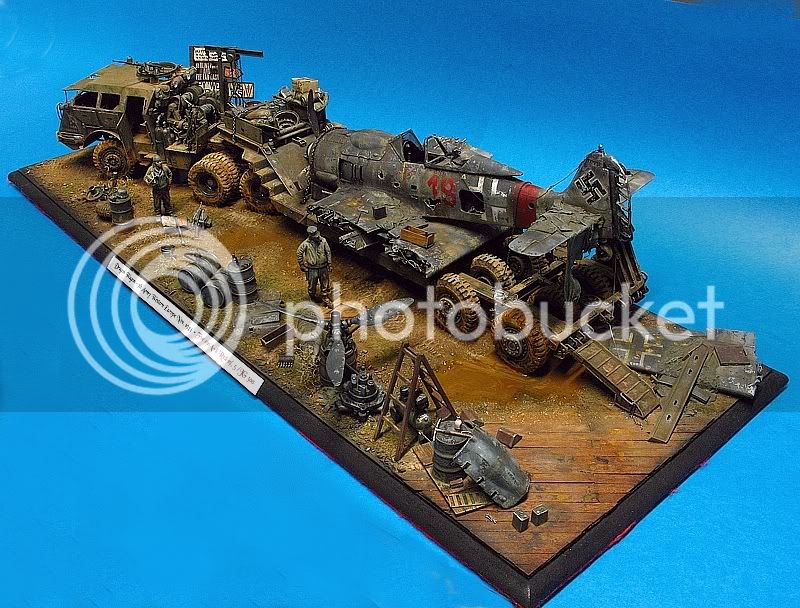 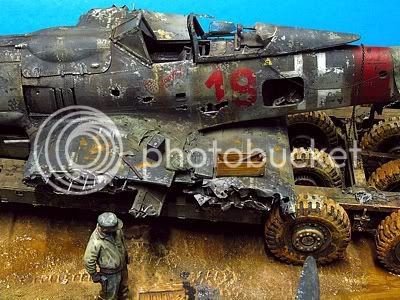 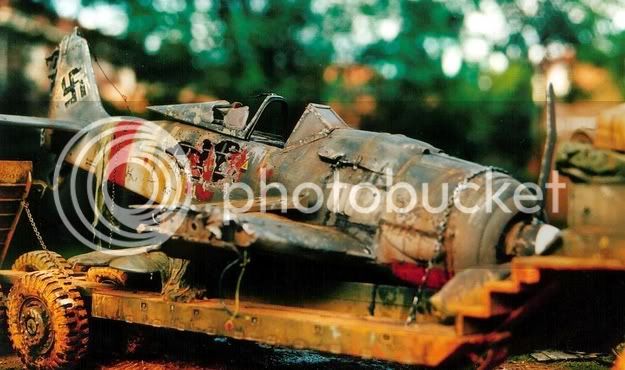 The kit is obviously the Tamiya Dragon Wagon and the FW190 is from Hasegawa.
The Dragon Wagon only required a few mods' as it was one of the first AFV multi - media kits from the big players. I added the oil reservoirs for the rear chain drive as well as all the small chains needed for handles, pins etc.
I also detailed the cab with additions to the roof lighting and warning labels, dash wiring and centre cab box handles. I replaced the .50 cal with a resin/PE Verlinden one.
Numerous bags and packs with straps were also added[and the odd crow bar jammed in between stuff too]. 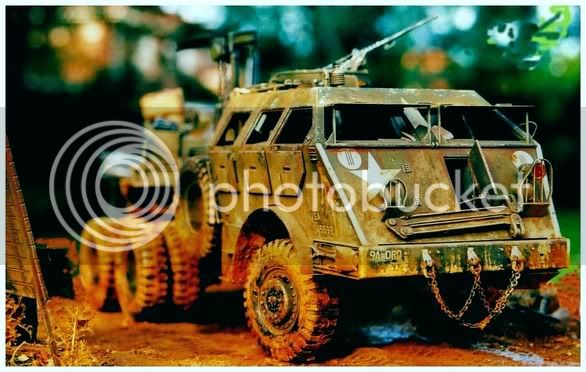 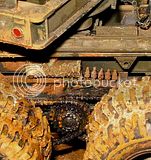 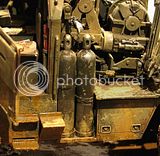 My original idea - Sam Dwyer suggested I use a Biber. I changed my mind and went for a plane so he ended up doing a version with the sub instead.

The FW190 received a major overhaul...........
- an inner frame being built for the rear fuselage radio hatch cut out in the right side, bullet holes, pilot flip step on left side, rear of canopy.
-cowling clips, Ariel, rear tail wheel improved
- wings cut off and flaps re-positioned, rear canopy smashed and rebuilt with slide wire, bracing, access hatch and new copper base
-rebuilt rear tail flap as bent and damaged inner frame with torn fabric
-cockpit details enhanced and added
-brass gun barrels
-wiring for broken wings as well as simulated bent and cut aluminum ends
-destroyed right side with damaged paneling.
It was the OLD 1/32 scale kit that is along way behind their new one.
I mix these scales with planes and tanks because their is no alternative, but they fit OK. VP figures are over-sized a lot of the time anyway and people come in all shapes and sizes. Years ago I did a compare with 1/32 to 1/35 in planes and the difference is very minimal, so close its not worth worrying about while 1/35 scale versions are not available. 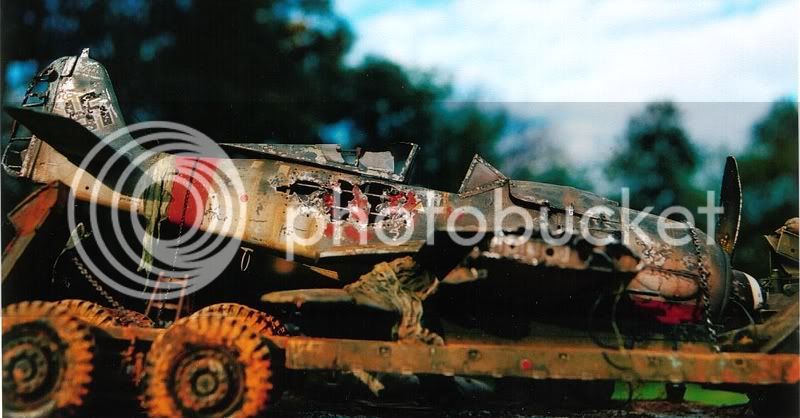 The groundwork was done in the usual way but with this scene I really wanted to try to capture the pre- winter [getting cold and wet but not snowing] feel, especially as winter that year came later than expected and the first week or so of the Bulge did not have snow only mud and ice. I used Tamiya clear multi-layered for the puddles . The swirling mud was done with OILS in between each clear layer to give a 3D effect in a minimal depth. 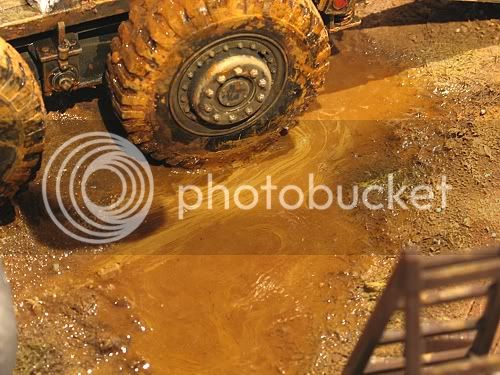 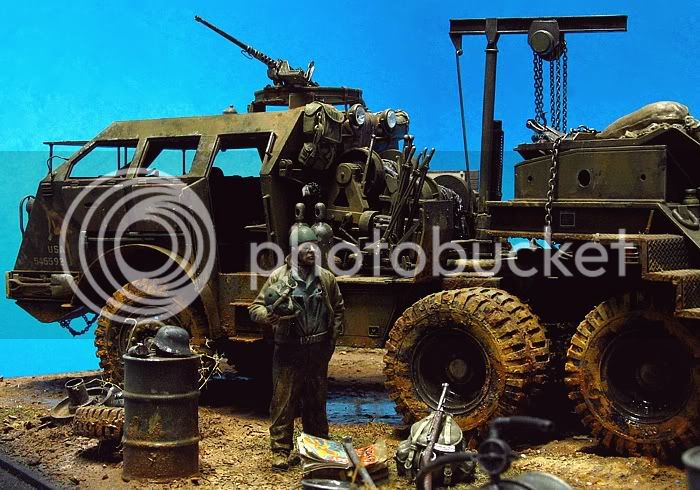 Hi Ian, thanks so much for sharing this, i'd seen the teaser shot on your bio and was always captivated, finally to see the up close and personal is great!

Von Bulow said:
Hi Ian, thanks so much for sharing this, i'd seen the teaser shot on your bio and was always captivated, finally to see the up close and personal is great!

Hello Adrian,
I am glad that you got to enjoy the detail - sometimes it's quite frustrating when there is only one photo and you want to see things from other angles and closer.

Master At Arms And Resident Curmudgeon

Staff member
Wow, Ian! That is simply fantastic!! So much going on, the swirled mud is TOO COOL!! B) :drinks

One of my favorite dioramas. Beautiful
James
A

Holy crap. I think I can just throw my dragon wagon kit in the trash, there's no way I can get even in the same universe as that!!

Thank you Mike, Terry, James ,Adam and Piase.
I appreciate your kind words.
Good to hear that this hasn't aged too badly - puts a smile on an' ol' modelers face

Master At Arms And Resident Curmudgeon

Staff member
You always make it look SO easy, Ian!!

It might look easy but it never feels that way Mike. It's ALWAYS really hard. I know there are good modellers that say it is for them, but I am definitely not one of those.
The advantage is that it is always a challenge and it keeps me hungry for the next one.

Thanks for posting it! I have to say it is my favorite of yours, well that is if I have to pick.
C

It's about time I chimed in on this: absolutely fantastic! I love everything about it, but the composition is the thing that get me: a nice, long scene that you could pan across with a movie camera- the story just gets better as you go along. The lurking German soldier- what tension! Truly a masterwork- cheers!

This is a splendid dio Ian, I would love to know what you used tor the tie down chains. Where may I be able to get some?
D

Thanks for posting these pics Ian Amazing detail, love the broken wings!

Now I have to go! A lot of pics to look at

...one of the best works that I´ve ever seen...really,love your style


Thanks to everyone - a very positive response - glad you enjoyed it. B)

Sherman 18(we like the same one) - you don't really have to pick.

:v Chuck - Glad you chimed in :dude I love that you appreciate the context and layout - always difficult with a long subject. :drinks -thanks

:hmmm Paul - the chains were from the railway shop- they had a varied selection but they needed painting . There are some really small ones.

:dance Panzerace007 - Thanks, thats a BIG THANKS

:coolio Luiz - Thats another BIG THANKS-

what can I say :idonno