Menu
Log in
Register
Install the app
You are using an out of date browser. It may not display this or other websites correctly.
You should upgrade or use an alternative browser.
A

One of the Vets I was over with my Dad the other day, he is not enjoying the best of health, hell he is 84 ,as he says "I'm getting my moneys worth out of the NHS " hell he makes me laugh, we seem to do a lot of talking these days, not that we did not in the past, but we appear to do more now.

He still does his oil and water painting and is very active in the community. He says he knows the old clock of time is ticking when Remembrance day comes along and another face is gone. He was the only one able out of his group who landed on D-Day to lay the wreath, in fact there is only 2 left, Ted Chapman VC one of his pals died a few years ago.

My dad goes back every year. Although he does not drive and the numbers dwindle, he feels that he has an obligation to do it for as long as he can. I went with him for the 40th Aniversary o the D-Day landings and an enduring relationship with a small Normandy village followed.

After the breakout they dug in in the Orchard of a small town called Mondrainville. During a lull in the fighting my Dad went into the farm house. As he was walking out he picked up a small black and white picture of the farm house and placed it in his battledress pocket . He kept it with him through out the war. The war ended and life went on He joined the Police and served for 32 years. Dad never went back to France until 40 years later when a small group of closs pals went back back to visit the the country side that forged their youth.

My dad said that your memories are black and white. Dad had brought with him the dog eared black and white photo, he walked around one village unable to recognise any particular images he could remember. Then moved on to the next.  He split up from his pals and walked down a small road turned a corner into a large garden. There sat an entire family enjoying a meal under some apple trees. He apologised for disturbing them and went walk away, a man called over and asked us to join them. Dad explained that there were three others in his broken french and they were called over. We all sat down with the family. The guys were wearing there blazer badges so conversations moved onto that day in June. I sat there watching these old lions relive there youth.

One of the guys who sat there was the owner of the garden, Mt LeGoff. My dad explained that he had a picture of a farm house  and showed it to him. There were shouts and all sorts of commotion as he showed the photo. Mr LeGoff trotted off to the house set back in some trees and came back with an elderly lady who was in fact Madame LeGoff his mother.

My father explained that he had been dug in in a small orchard in this picture. Mr Legoff then said, "You are here, this is the Orchard". Through the trees we could see the farm house pretty well unchanged. Strangely when my dad had sat down with his first glass of wine he was in fact no more than perhaps 2 feet from where his fox hole had been.

What ensued was amazing. We explained that the wives were at the cars, some was dispatched with myself to get them and we all sat in the orchard and had the most fantastic time .

This relationship has continued since then, so much so that my father and Tom Griffiths set up and exchange arrangement between the school in Mondrainville and a school in Abergavenny which continues to this day.

A road was named after Edward Chapman VC BEM and unknown to Tom and my Dad a new school was built during the year of the 60th Anniversary of D-Day. Before they went to the beaches they were both called to the Town Hall in Mondrainville. There they were informed that the new School will be called Ecole Edwards Griffiths and will always carry that name as laid down by the then French Education Minister. 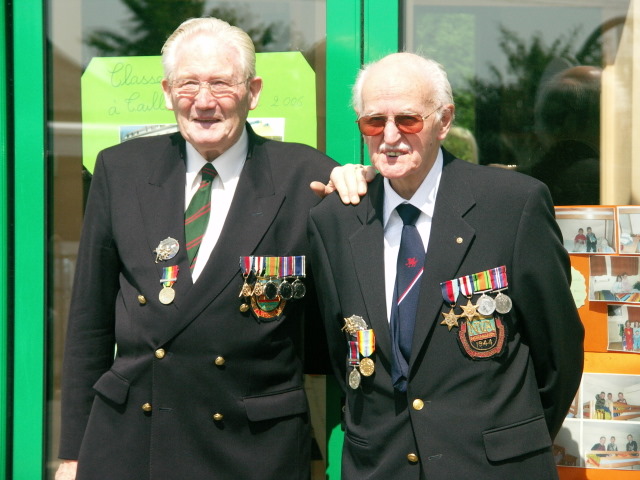 This image below is of my dad looking across from the playing fields of the shool on the day of the dedication. I left him on his own with his thoughts, no doubt cleary remembering when those quiet fields that now lay before him were the resting place of so many young men. No matter if you were from the valleys of Wales, New York City, or the country side of Canada.