This is my current build list for this UBoat project. It is a work in progress and may change as I learn more.
Here I will explain each build as an overview and then provide a link to the detailed post under my 'Silent running' section. 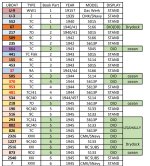 Master at Arms · From Australia, Victoria
My background lies in Industrial design and Engineering but my passion is bringing texture, color and realism to a thought provoking scene. My art is both technical and poignant but I like to approach subjects from a darker, dramatic angle. I like building outside of the box and extra detailing where it enhances the subject but will build OOTB when i want a simple build with an already great model.
Military, scifi, damaged.... I love it all and will bring this to my art work as well as my models and dioramas

Research on Type 9C U-516.
In researching the Lisahally surrender diorama, I came across a great photo of another boat there, U-516.
In an earlier post (April) this particular boat was going to be my original choice for the main subject with the other boats around it, however, after 'diving in deeper I realised I could not identify the features of the surrounding boats as well as the group further down the pier with U-802, so these became the focus. However, my research on U-516 led me down the 'rabbit hole' once again, highlighting some very interesting unique details with this particular sub.
As a result of my research, I contacted the author of the 'Wolfpack articles, Dougie Martindale, owner of Accurate Model Parts and put my observations on this boat's deck pattern in some email discussions with him, as through previous emails he had mentioned he was working on a new article on the Type 9 U-Boats, which resulted in him including my info in his latest document (172 pages). I also got a special thanks in the acknowledgement section.
To say I was pretty happy to have my research on U-516 included and then get acknowledged is an understatement. Mr Martindale is one of the leading experts in the world on U-Boat details for modelers and his research on the Wolfpack articles has spanned more than 10 years. He sent me his new Type 9 document direct by email a few days ago and it is the definitive document for type 9 U-boat detail modelling. I think I have done well for a tank diorama/ artist guy to get in a U-Boat book and this certainly bodes well for my own projects motivations.

U-516. Type 9C details
I had previously purchased a U-516 PE deck from RC Subs and had planned to model this sub in its 1945 condition at surrender but will now put this on a stand with all the extra modifications. In looking at the details further, I noticed the PE AFT deck pattern did not match the photos and realised it had retained the original' slotted deck. 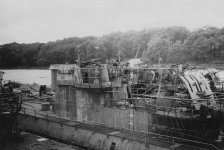 I will list below what I have found and match to photos I have attached. 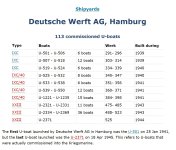 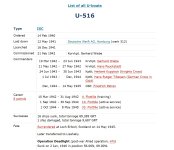 - The 1945 version has had the tower upgraded to Turm 4, the deck modified to a Fast Dive config. and a snorkel fitted. The deck appears to be planked all the way to the triangular steel section at the front, unlike U-190 the only other slotted deck Type 9 upgraded to a FDD. U-190 has a section left slotted just prior to the steel triangle. 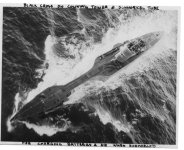 - Fitting of the Fast Dive Deck (FDD) has resulted in the forward section replaced from 'Slotted' to 'Plank'.
- Applying the thinking of shipyards not replacing the entire deck pattern for snorkels and such, I figured the rear deck , behind the tower, would not have been been changed unnecessarily. 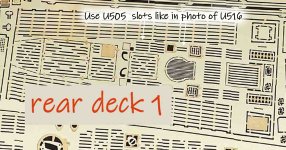 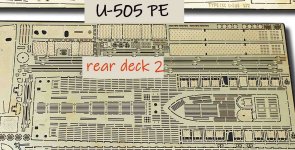 - The final aspect that has 'clinched it' for me is the deck rails between the torpedo storage covers and the centre hatch pattern on the rear deck, which differs a lot from the later 'planked' pattern. 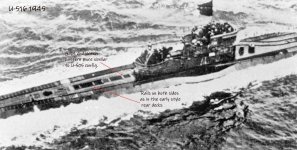 This image above clearly shows the rails and the spacers between the hatches as for an early slotted deck pattern(see PE for U-505). 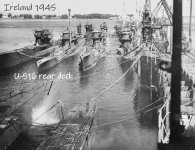 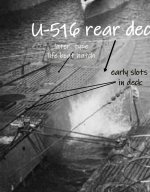 This image shows the distinct pattern of 2 slots in the decking, next to the centre mounted slotted hatch and can be seen as well as the slotted directly aft - these do not appear on a 'planked 'deck pattern (see PE images and 868 image below). 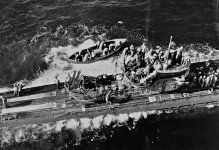 -The lifeboat hatch covers may well be the later version and I will be modeling the deck detail like this.
In the initial photo you can also see that the original slotted pattern deck is retained right along the side of the tower as well like on U-190 below.... 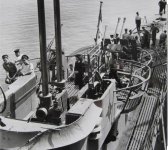 So this all amounts to a very unique boat with a forward FDD and planked construction back to the tower, with an early slotted aft deck section.

The other reason for this interest being the RC Subs PE for U-516 has a late model 'planked' rear deck configuration, which I think should be in the earlier U-505 config.[which I also have the PE deck for - see images for RC Subs and compare].
I plan to mix the two PE sets to create a more accurate model as I have not used the rear PE deck on U-505. I can then cut out the Life raft container doors and use the late versions from the u-516 PE.
I have based the pattern conclusions on photos and the PE patterns from RC Subs as I feel he provides an accurate set but has just missed this peculiar aspect of the boat.
Last edited: Nov 25, 2022

*U-Boat build list updated. Just click on the image at the very top of the page for the final list.
I know it's long and it seems 'undoable' but I am actually quite committed to this project in interest/passion , willingness to complete and financially, having purchased all the neccessary models and extras. Research in detail is probably 75% and I have already started planning out the article / book layout in parts.
* As an update to this U-516 research, I was given a mention in Dougie Martindale's publication on the Type 9 U-boat for my technical discussions and help on U-516. I highly recommend this free download as it's the most highly detailed and accurate technical study of the Type 9 done to date and is made for uboat modellers. Every technical detail change on the external features of Type 9A,B and C's is discussed and studied - a must have if you want to nodel any of the type 9's correctly and accurately.
It's been my Bible for my builds and will be heavily referenced in the Uboat model book.
You can get it it here:

Just scroll down the page until you get to this 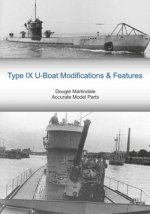 Awesome stuff and thanks for the link. Lots of info there.
James