Some ancient builds, a Canadian CMP C-60L mobile Workshop from '83

As with the Dingo, In the summer of 1983, I had just received a lot of notoriety for "The Winds of War" diorama the previous year. At the time, I was hearing feed back from my friends that there were those who said I couldn't possibly compete with the best armor builders in America. I just wasn't good enough. Judging from the vehicles in the Winds of War, they were right. However, in that year I had learned a lot! I was like a sponge, soaking up every detail and technique out there. At the time the three best were from the midwest, where I was from. I won't mention their names as it no longer matters, but they were the armor model gods of that time.

I decided I would really take my time and make a couple of armor pieces that could compete with them. My second choice was a Canadian CMP, Canadian Military Pattern), C-60L mobile workshop.. At the time and even today, there are only two CMP models on the market. The Italeri 15 cwt and the Tamiya Quad Gun Tractor. These simulate both patterns of the CMP, and I used parts from both. We went to Europe that spring and I was able to extensively photograph both vehicles, so I had my research plus a couple of books on each I picked up at the book stalls in London.

I chose it because it was an extremely busy vehicle and really unique. To my knowledge, (I could have missed it somewhere), this is the only model of this particular vehicle ever built. I still have one of the photos that got me interested. While building this, I discovered two cutting edge technologies first found in the model railroad products and I thought I had just discovered a whole new way to add detail. I began with the frame. I was looking through a Model Railroad shop when the owner called me over to show me two amazing products that had just been released. One was a product he called photo etch!

The first release from this new company was tread plate. I bought him out. I used it to upgrade the steps on either side of the cab. I made a new, larger bumper from brass strips and rod and sheet plastic. I converted the frame to a stronger and longer version and used the suspension from the Tamiya Quad tractor with the wheels and tires. I also made the steering workable. I built a new spare tire frame from brass strip and plastic sheet. The exhaust and the drive shaft were modified as well. Various other smaller details were added. 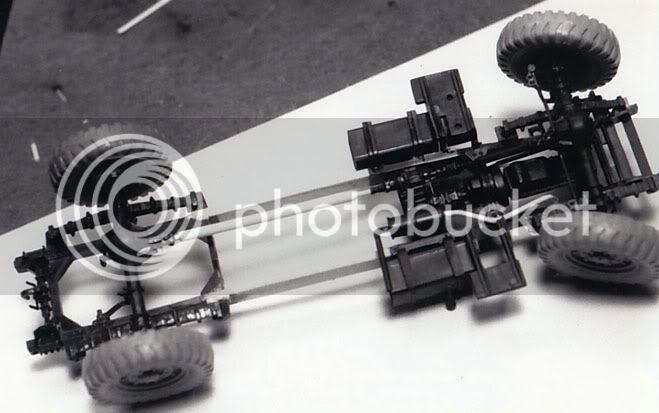 I took the cab apart, removed the hood, (bonnet) and grille, cut off the console. Then I replaced the windshield frame, the console, and made a hinged working glove box, new pedals, gear shifts. all using plastic card, sheet brass and tubing. I added new door hinges that would be workable. On the exterior, I made a new hood, (bonnet), framed out the grille with plastic strip, then added my next new discovery at that train shop. Extruded brass mesh. Not PE, but a process that was around before, but it's first use in miniatures. The pattern was octagonal, perfect scale and I was in seventh heaven!

I carved the Chevrolet logo from card stock and Viola! Here is the scratch engine with the wiring coming out of the distributor and radiator, the doors hinged and with working latches. The door above is the kit part. . Even the panels open and close. At the time, working hinges were all the rage, so I hinged everything I could find.

Hell. I was on a mission! Here I have one of the hinged doors attached and workable. All the glass was replaced with microscope slips. Not slides, they are way too thick. I made a cutter out of a diamond tipped phono needle soldered to a pice of brass tube and cut them all to shape! Here is the new bed. I used the wheel wells from the original bed. 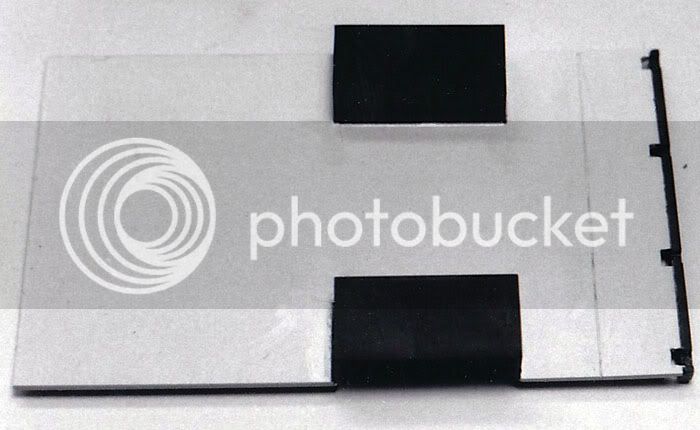 Here is the bed mounted to the frame and the cab being test fitted. The top hatch is from plastic sheet with stretched sprue rivets. So is the hatch cover. I hinged it as well. All the workshop was from scratch. The major tools, lathe, drill press were made from plastic and plastic vac formed on my Mattel Vacu-form machine.

. Several of the drawers were on hand made slides, so they worked as well. The most difficult parts were the three shop lights. I used wire and small brass rod and tubes for the lower part, the carved a shape in basswood, vac-formed it three times to make the compound curved shroud of the lights. Then micro wire for the guards. A plastic headed pin served for the bulbs. As you can see, that new extruded brass mesh got a workout as well as the new and strange PE stuff. BTW, the chain that hold up the tail gate was secreted away during the cover of darkness from Susan's jewelry box. She will discover that loss 26 years later when she reads this. The following are shots of the completed CMP. It took many awards back in those days, even a few best of shows and a gold medal at the, (then, and maybe still), largest model show in the world. The Model Engineers Exhibition held annually in Wembley Center, outside London. The nephew of Lord Montbatten, of Pacific theater fame, placed it around my neck. He had some title or another. We Americans are in awe of royalty, so that gave me a major thrill and something to talk about for years. Here you can see the open hood, doors and panels. Also the working hatch and door hinges This shows all the detail I added to make it look exactly like the real one. After I retired from competition in 1984, I put this and the dingo into a new, at that time, diorama called "Lost Cause". Here you can see one of the shop lights hanging from a hook on the left rear side panel. This is so you can compare the model to the real vehicle.

I hope you like this. I have some other old SBS's but not of models, only scratch built buildings.