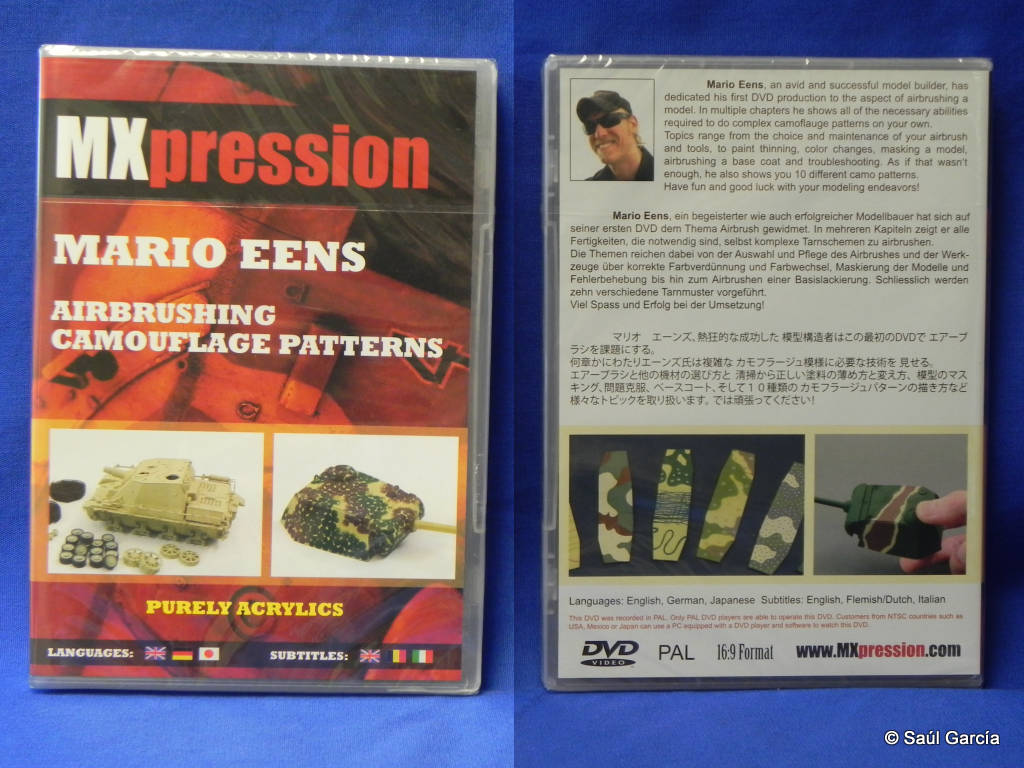 MXpression is a new company from Germany that caught my attention when they released masks.  Truth be told, I confused them with Uschi van der Rosten which also produces masks.  After introducing myself, they were kind enough to send samples of their masks along with two very well done DVDs.

This DVD is one hour, six minutes, and twenty two seconds long and produces by MP[2] Media for MXpression.  Aside from the Introduction, chapters include Equipment, Safety, Airbrush Basics, Basecoat, Freehand Camo Patterns, Masking, Finishing, Summary, plus a bonus in how Mario prepares a Model Holder for airbrushing.  It should be noted that this is in PAL format so some DVD players will not work.  If one has a DVD as part of one's computer, it should work without any problems.

Narration is in the language one chooses.  I selected English but I am not sure it is Marion Eens' voice we hear as the voices speaking German and Japanese (the other language choices) seem different.  Sub-titles are also offered in English, German, or Japanese.  Throughout, there is a rock riff played.

After the one minutes and forty seconds introduction, we start with the Equipment with good information on choosing an airbrush, compressor, and acrylic paints.  Since I usually paint my models in lacquers, the idea of using acrylics interested me and I ordered off some sets from Lifecolor, Vallejo, Agama, plus pulled out my stock of Gunze Sangyo and Tamiya acrylics.

Moving on to Safety, this section provides excellent information that many modelers take for granted.

My favorite section is Airbrush Basics.  Here I am finally presented with visual as well as described reference for proper thinning of the paints.  Unlike many that describe ratios, finding the ratio is left to the viewer but the proper consistency needed is visually shown and described.

Still part of Airbrush basics, Colour Preparation (British spelling is used throughout) is covered quite well followed by exercises.  This is what makes this video excellent for novices as the exercises are shown along with the expected results and problems one may encounter.  The text written on the exercise paper is in English.  The fact that the exercises are performed first on paper then plastic shows that the difference in porousness is addressed.  Cleaning the airbrush and quick color changes are also shown clearly.

Basecoating is next and the vehicle chosen (a Brummbar) is already primered.  Tamiya colors are used to basecoat with Yellow paint.  While Mario basecoats, possible issues and their resolutions are mentioned.  I was surprised at how thin the paint he uses (remember that I am accustomed to lacquers) and how many times he went over the surfaces to increase opacity.  Mario's method of painting wheels are then shown.  Quickwheel masks are shown being used.  Tracks (Friulmodel or another metal link set) were painted.  Last, small parts, such as the drive sprocket wheels, are covered.

Freehand camouflage patters follow and begins with preparing a sketch of the scheme chosen.  Then outlines are sprayed onto the model which are subsequently filled in.  Thin lines are next followed by outlining with a brush.  This is the hard edge scheme.  For mottling, a Pantherstellung turret is used.

Masking is next and I was surprised that MXpressions' own masks were not used.  Tamiya masking tape is used and the masks are cut.  Trumpeter's E-10 is the subject although I will point out that using scale drawings is NOT the way to make proper masks due to the angles or curvature of the armor.  My method is to apply Frisket paper directly to the model to draw the scheme.  If the low tackiness of the Frisket is compromised when removing it to the point it won't apply to the model again, glue (I use a Spray Mount Glue) onto sheets of masking tape and cut out the pattern.

Masks are used to create a hard edge, and semi-hard edge (tight overspray) patterns on armor skirts.  Silly Putty is also shown and this is the same product MXpressions sells as Panzer Putty.  The Pantherstellung turret makes a second appearance for the ripped paper mask technique.

Last of the masking techniques covered are stencils.  Jagdpanzer 38 skirts are used in this demonstration.  The imitated stencil technique is covered next using another Pantherstellung turret which gets covered in dots.

After so much painting, cleaning the airbrush is covered in detail.  The bonus shows Mario's Model Holder for painting.  At the end, I finally see that Mario's voice was not used at all.  The narrators are Florian Anders, Alexander Ketel, and Timothy K. Lippert.

Again, my thanks to MXpression for a wonderful DVD which should be given to novices of the airbrush when awarding them with the tool.

Here is a short trailer to give you an idea of the quality: MXpressions