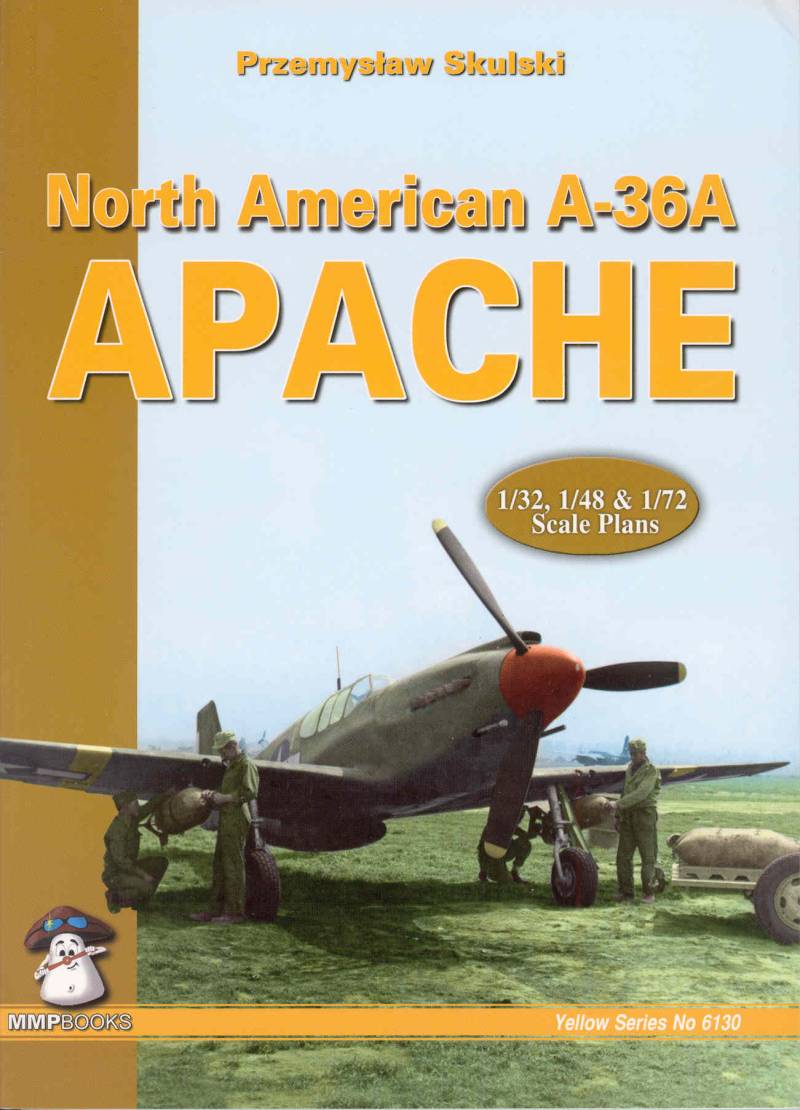 Mushroom Model Publications latest release in the Yellow Series features the A-36A Apache and is a welcome addition to those interested in this aircraft. Prior to this release the best source was the Squadron walk around book and this new release contains much more information. The book is 6 1/2" x 9" in size and is 128 pages long featuring a color WWII photo on the front cover and a photo of a restored A-36A on the back cover flying with the dive brakes open.

The book contains plans in 1/72, 1/48 and 1/32 scales, the latter two being on a removable folded insert. The text in the book covers the initial history, military debut, operations in Sicily, Italy and the Far East. There is also short piece on the only Apache ace. Also included is a summary of the Apache's accomplishments which are impressive considering its rather short service life and brief history of the remaining three A-36A's. The book then goes into a technical description of the aircraft with excerpts from the aircraft manual. While this all sounds like a lot of verbiage, text makes up only a small part of the book, which is loaded with photographs. Due to the size of the book most of these are smaller than that found in many publications. In all fairness most are probably close to the original size of the war time photos and are much clearer printed in their original size than blown up to fit a larger page.

In all I counted 60 black and white wartime photos. There are 9 color wartime photos, 80 color photos of the surviving machines, many of these are walk- around style showing various details. Also included are 27 diagrams from the manual, some of which are colorized. A couple of very nice renditions, one of the forward cockpit ala Maru Mechanic style and one of the gear bay which are much better at showing detail than most photos. If that isn't enough the book finishes with 24 color profiles, some just side views and a few showing top and bottom views as well. While a few of the photos are the same as in the squadron book most are not and there is a good variety of photos not only showing the aircraft but some of the rugged conditions from which these aircraft operated.

This is an excellent resource for anyone interested in the A-36A and especially anyone who is building a model of it. I wish it had been available when I built mine. The book is MMP's No. 6130 in their Yellow series, ISBN 978-83-61421-45-0. I bought mine directly from Mushroom as I seem to have problems finding them in stock on this side of the pond. It cost £20.00 including shipping and I received it in 5 days which is better than most state side dealers.