Today I will review a new book from Luftfahrtverlag Start, Mit der Kamera an der Front. Als Kriegsberichter bei der I.(J)/LG 2 und dem JG 77. The title is quite a mouthful and the book is quite a book. 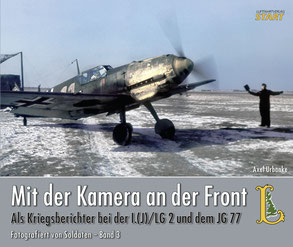 Luftfahrtverlag Start is a German published of exceptional books. This title is the third in a series of photographic journals titled Fotografiert von Soldaten. Each volume contains the personal photographs of a particular individual and so capture life as you don't see it elsewhere. The first volume followed a young Panzer Soldier in Africa and Italy from 1942 to 45 while volume two follows a Medical Dr. in the 3rd Panzer Division. Both incredible books with so much information and some really fantastic photography. The third volume is somewhat different though. It follows an unknow War Correspondant. who joined I. (J)/LG. 2 in 1941 on the Englisdh Chanel following them through their operations in the Balkans and Romainia. He was then attached to JG. 77 in the Crimea.

The book is 240 pages long with 54 colour and 170 black and white photographs. There are 13 very nicely done colour profiles and 14 colour maps. The book is 25 by 28.5 cm. The accompanying text is is both German and English.

The book is broken into 6 chapters and then a detailed list of victories. The breakdown is:

In the forward it was stated that the pictures and information obtained was only a small portion of this camera mans work. If would be really nice if more could be found to as the quality and subject matter is excellent.

As I looked through the volume I was struck by quality but more importantly by the settings. Every day life in the field with a fighter squadron. The number of British aircraft either brought down or left in the dash for the sea is outstanding. Normal maintenance activities as well as combat are captured by this mans camera.  Again as in the previous two volumes I learned things I never would have imagined. Whether the unusual victory markings on Wilhelm Hachfeld's Bf 109 (2 victories in the air marked on the vertical stab, and 6 ground victories located on the horizontal stab just under the air markings) or photographs of Colonel Generals Yamashitu's visit to the Sqn.

I always like to look at a review book from the perspective of a history buff and as a modeler. Again this book would satisfy both. Full of interesting information and full of amazing pictures to satisfy any detail hungry modeler. Colour schemes and markings are very clear and the maintenance pictures should provide lots of inspiration for any builder.

This book is another excellent addition and I highly recommend it to anyone interested in history or the Luftwaffe.

I'm sure any good bookstore can obtain a copy for you also.

Thank you to the publishers for this copy.