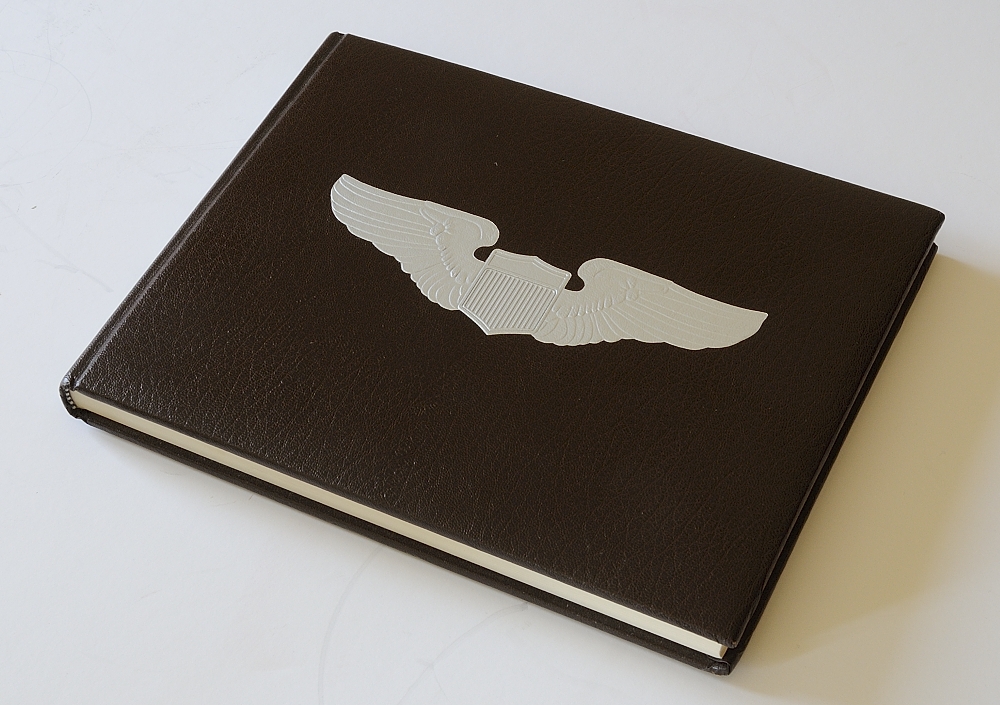 This is not so much a book review but a chance to bring to your attention a diary kept by a American fighter pilot based in the UK during WWII. It’s a brilliant series of well over 100 sketches of everyday life, training and missions and tells the story of one man’s war that I should imagine reflects thousands of men’s war.

Starting with his call up draft to Greenwich village in January 1942, the book in its early stages benefits greatly from the letters and memories of Betty Lou , Georges then girlfriend, soon to become his wife. They add a different perspective and lift the book out of the usual one dimension format diaries tend to take. George is subjected to a seemingly endless selection process of physical and aptitude tests , all of which come across with a brilliant sense of humour “ I can’t even drive a car so they are making me a P47 pursuit pilot. My new best friend gets lost in Greenwich village so they are making him a navigator” sets the tone for what’s to come.

The book takes us right through basic training and flying school, each notable event is given a page of drawings and a paragraph of text to accompany it, Often the People in the drawings will have speech bubbles so they can add their comments! this in some cases extends to passing birds, or small furry creatures that have something to say from behind a chair leg.

In Early December 1943 George arrives in Scotland and in his words “Catches a train straight out of a Hitchcock movie down to the South East of England” a reference to the UK in midwinter and after 4 years of war and rationing and austerity I suspect that must have really hit the tens of thousands of US personnel who one week were in the bright lights and next week, plunged into a land of blackouts and little cheer. 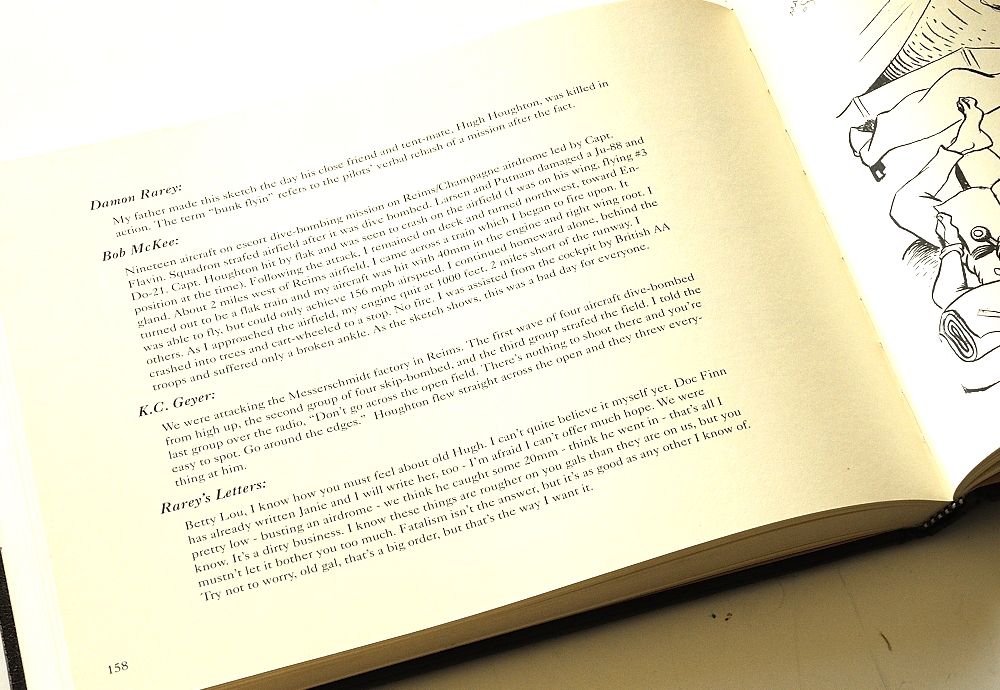 George arrives at Wormingfold or as the Americans called it “ Station 159”. Situated in the Heart of the county of Suffolk it was one of many fighter airfields in this corner of the UK adjacent to the coast and a short hop across the North sea from Holland, the heavy bombers were located further north in the county of Norfolk, partly because of their greater range but mostly to give them time to gain altitude before the fighters picked them up for the outward leg of their journey across the north Sea. To give you some idea Wormingfold is about 100 miles from the Dutch coast on a direct line to Germany 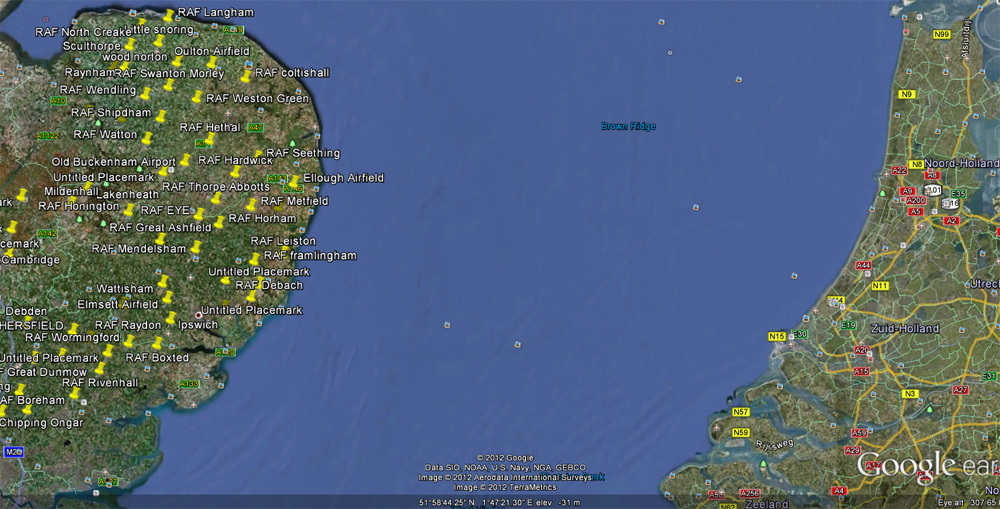 George spends his first few winter months in England escorting B17’s across Europe, friends come and go, some shot down, some just moved on and after a time George becomes known as Dad, partly because of his longevity with the squadron (a few months) but mostly because at 27 he is an old man by fighter pilot standards. His artistic abilities mean he is much in demand on Sundays to paint nose art on comrades P-47s and it earns him a few pints and lot of cigarettes.

Its now 1944 and as the tide of war changes so do the missions, George is moved to the south Coast to an Airfield that is still busy today called Headcorn in the county of Kent. Headcorn is just 50 miles from France and with the invasion brewing things start to hot up. Betty Lou has given birth to a son. Georges drawings depict him in his P-47 in formation with a stork carrying a bundle in its beak, Georges new son Damon who becomes one of a few characters to travel on the his P-47 wing in his drawings as he heads into battle.

The P-47’s fly constantly, sometimes twice a day to France, beating up German air fields. Dive bombing marshalling yards and carrying out ground attack missions, all in an attempt to soften up the Germans in the lead up to D-day. George still finds time to unwind in the evenings to write his diary and draw his sketches. This takes on a new importance to him now as he records his time in England for his new baby boy. Extracts from the diary and sketches are sent home more regularly, something strictly forbidden by the US forces command, should the letters fall into the wrong hands and identify the location of people and Sqn’s in the UK. 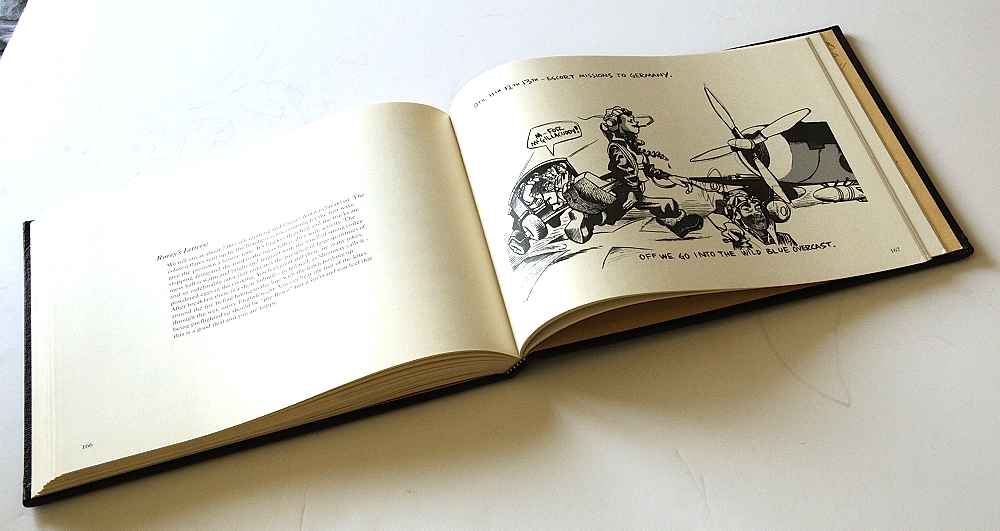 The book is full of stories and pictures of pilots who had great escapes and near misses and those who were less fortunate. One pilot lands his Thunderbolt with a hung-up bomb “under his seat” that explodes on touch down, the aircraft is blown upside down and into a thousand pieces…..the pilot walks away unhurt. Another screams down the runway but fails to lift off, it ploughs straight into the fuel dump and explodes. 10 minutes later to everyone’s surprise the pilot walks in to the mess carrying his parachute unscathed, two workmen with pickaxes who were nearly run down by the P-47 ran into the exploding dump , forced the canopy open with their pick axes and got the pilot out…

In June 1944 the diary ends. George was leading flight of four Thunderbolts on a hunt for targets over France. His wingman spotted a German truck on the road and George led his men down to attack. He was hit in the dive by a volley of 25mm flak and his P-47 exploded killing him instantly, his wing man was hit in the tail. The two new recruits flying with them retuned to Headcorn and reported the men missing in action but certainly dead. 25 minutes later the wingman nursed his smashed P-47 over the airfield boundary and landed.

George died having never seen his son but he left him an extraordinary record of a short period of his life.

The book is a little master piece, a slice of pure history recorded daily as history unfolded. Events are recalled by fellow pilots at the time and added to Georges letters, diary entries and superb sketches, memories of his wife and events unearthed by his son Damon in later years , all build together to make a very personal account of Seven months on the front line in the 379th Fighter squadron in the lead up to and weeks after D-day.

I don’t think this book is still in print but I found my beautifully leather bound first edition with silver embossed wings on the cover on E-bay for £45.00.  Since then I have seen them new in Canada for £50 and used for as little as £7.00 in online book stores.

If you are interested ,Wormingfold and Headcorn can still clearly be seen on Google Earth