The Mitsubishi A5M was the world's first monoplane shipboard fighter to enter service and the direct predecessor of the famous Mitsubishi A6M "Zero". In 1934, the Imperial Japanese Navy prepared a specification for an advanced fighter, requiring a maximum speed of 220 mph at 9,840 ft and able to climb to 16,400 ft in 6.5 minutes. This specification produced designs from both Mitsubishi and Nakajima.

Mitsubishi assigned the task of designing the new fighter to a team led by Jiro Horikoshi (original creator of the similar but unsuccessful Mitsubishi 1MF10, and later responsible for the famous A6M Zero). The resulting design, designated Ka-14 by Mitsubishi, was an all-metal low-wing fighter, with a thin elliptical inverted gull wing and a fixed undercarriage, which was chosen as the increase in performance (estimated as 10% in drag, but only a mere 3% increase in maximum speed) arising from use of a retractable undercarriage was not felt to justify the extra weight). The first prototype, powered by a 600 hp Nakajima Kotobuki 5 radial engine, flew on 4 February 1935. The aircraft far exceeded the requirements of the specification, with a maximum speed of 279 mph being reached. The second prototype was fitted with a revised, straight wing, and after various changes to maximize maneuverability and reduce drag, was ordered into production as the A5M.

The aircraft entered service in early 1937, and soon saw action in aerial battles at the start of the Second Sino-Japanese War, including air-to-air battles with the Republic of China Air Force's Boeing P-26C Model 281 "Peashooters" in the world's first aerial dog fighting and kills between monoplane fighters built of mostly metal.

Chinese Nationalist pilots, primarily flying the Curtiss Hawk III, fought against the Japanese, but the A5M was the better of almost every fighter aircraft it encountered. Though armed with only a pair of 7.7 mm machine-guns, the new fighter proved effective and damage-tolerant, with excellent maneuverability and robust construction. Later on A5M's also provided much-needed escorts for the then modern but vulnerable Mitsubishi G3M bombers.

The Mitsubishi team continued to improve the A5M, working through versions until the final A5M4, which carried an external underside drop tank to provide fuel for extended range.

The FineMolds kit comes in a medium sized tray type top open box of thin card stock with nice artwork on the front. Inside the box one finds the three main sprues in one sealed bag and the decals and clear parts in another. The parts are molded in a light olive or tan color, are crisply molded and essentially flash free. Mold separation lines are light and should be easy to clean up. The surface finish is variable almost glossy on most of the parts but some of the panels on the wings have more of a matte finish. Not sure if this was done to provide some variation when doing the natural metal finish or what. I did not find any surface defects and ejector pin marks have been kept out of visible areas. Surface detail consists of fine recessed panel lines and a few really small recessed rivets and fasteners. They are so small they may well disappear when painted. There are raised surface details where applicable.

The control surfaces are molded in the neutral position except for the rudder which is a separate piece but looks as if it is meant to be mounted in the neutral position as well. The ailerons are molded to the top wing surface so as to provide a nice thin trailing edge and there are gaps at the end to make them appear as a separate pieces. The cockpit is nicely detailed, the top surface of the wing is the cockpit floor to which everything mounts including the flight controls, fore and aft bulkheads and side panels with the structure to which other details added. The instrument panel has raised bezels with internal detail and a decal overlay is provided. No seat restraints are provided. Only a windscreen is provided so everything in the cockpit will be seen through the opening. A pilot is supplied with the kit, reasonably detailed for the scale, I didn't measure him but he looks a bit small for the scale.

The engine is a quite complete assembly made up of 10 parts with separate push rod assemblies, intake and exhaust manifolds and separate cowl flap ring. The propeller is a one piece molding. The wings have a one piece top and bottom. There are holes that need to be opened for the drop tank if used. The flaps are separate and can be mounted up or down. The wheels are designed with slots so they can be installed in the wheel spats after assembly and painting. The wheels are one piece moldings and are not weighted. OK, lets look at the sprues. The pilot had become detached during shipping. 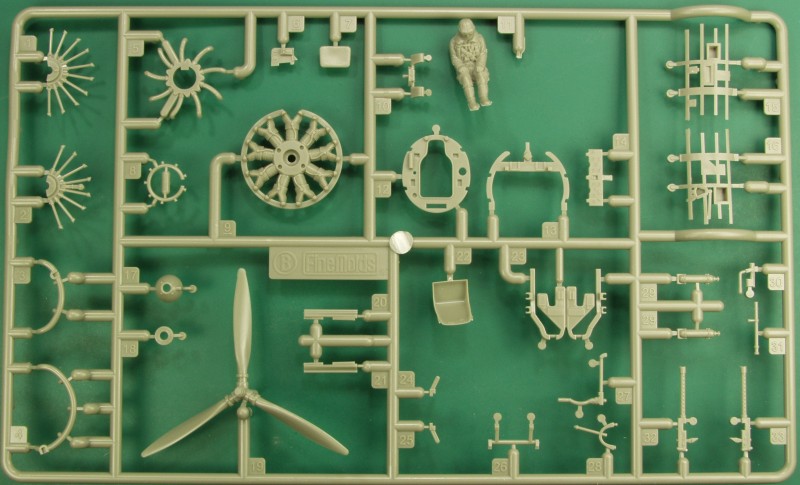 In this photo you can see the variation in the finish on the upper wing with some panels having a glossy finish and other a matte finish. The single clear part is thin and clear with well defined frame lines in recessed form.

The decals are thin, in register and have a matte finish. Excess film has been kept to a minimum except around the large letters. The sheet provides markings for three aircraft, all in a natural metal finish, one from China in 1937 and two from Japan, one in 1939 and one in 1941.
I have no experience with decals from FineMolds so can't comment on their quality. 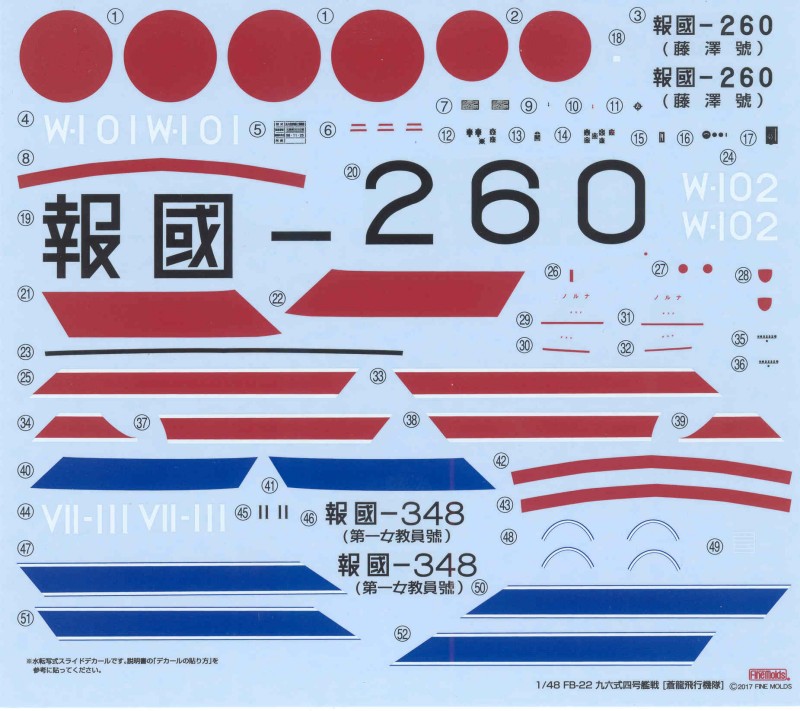 The instructions are map style, folded in quarters making eight panels. Most of the verbiage is in Japanese but there are enough English notations that it shouldn't be an issue as the diagrams are all quite clear. The front page I assume is history of the type ( I don't read Japanese). The instructions include a parts map, icon chart and the usual safety warnings. The assembly is divided into 18 steps and color call outs are provided along the way with color names and Mr. Color numbers. There are two panels with painting and marking instructions for the three aircraft on the decal sheet. There is also a color reference chart located there but I can't read any of it except the generic color names.

This kit looks to be very nicely detailed and fills the void for early war Japanese aircraft. Some of the early FineMold kits where not all that great for fit but their newer kits get better reviews. Still a good idea to treat it as a limited run kit and test fit before applying glue.