Overview Discussion
Bobcat 1/48 Yak-28P
Before starting a couple of things, first Bobcat, ohh noo another Chinese kit maker, well sort of, it seems that Bobcat is a reincarnated Xuntong Model. At least it's easier to pronounce. After turning out a couple of kits Xuntong all but disappeared. Looking at the packaging and the instructions it's easy to see the linage. That said it appears that this kit has a finer level of execution, panel lines are smaller and detail more petite. The mold maker company name and address has changed but it is still in the same city and province in China so I assume it was some sort of reorganization.

Secondly I'm am no expert on the Yak-28 series of aircraft nor do I have any good references. Therefore I will not be critiquing the kit for accuracy or things that the manufacturer did not do right. If anyone wishes to do so, be my guest but my review will limit itself to reviewing the kit from an execution standpoint.

A brief history: The Yak-28P is an all weather interceptor of the Yak-28 family. It was developed from 1960 and deployed operationally from 1964. 443 were produced between 1962 and 1967. The Yak-28P omitted the internal bomb bay to allow for a larger fuel capacity. Interception radar was added. Generally armed with two medium range K-98 air-to-air missiles and two short range K-13A air-to-air missiles, the Yak-28P was able to destroy low to medium altitude targets such as bombers and surveillance aircraft. The Yak-28P was the last Yakolev aircraft that served in the Soviet Air Force. The Yak-28P was withdrawn in the mid 1980s and replaced by the Sukhoi Su-15. 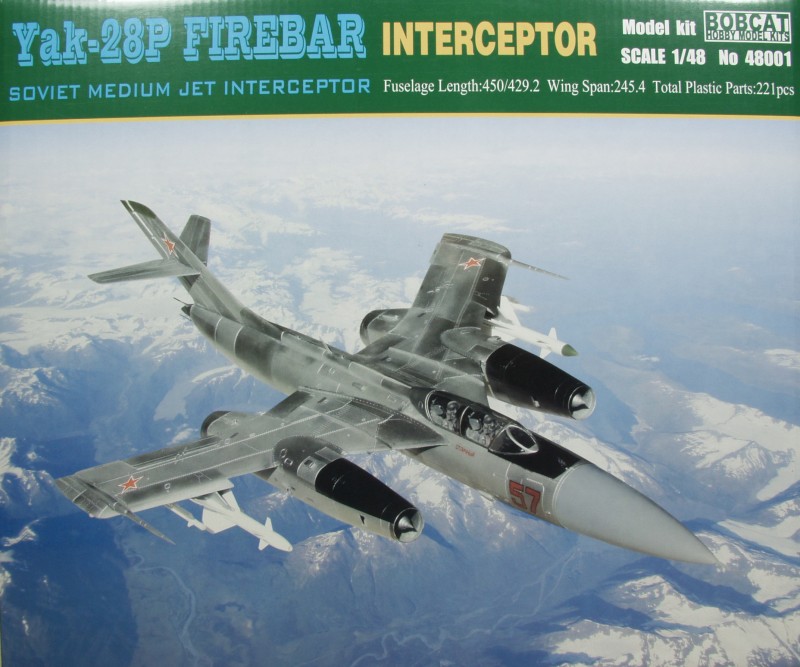 The Bobcat Yak-28P comes is a large top open tray type box made entirely of thin corrugated cardboard resulting in a nice sturdy container. While it's a bit over sized the largest sprue just fits within the confines of the box. Inside the box are five sprues molded in gray, each one in a resealable bag. There is also one bag with clear parts and one that has an alternative nose piece in it. The decals are in a separate plastic sleeve.

The parts are cleanly molded with only a few hints of flash and mold separation lines on parts are light. The parts have a smooth matte finish and surface detail consists of fine recessed panel lines as well as recessed rivet and fastener detail. Rivets and fasteners are restrained and not over done and they vary in size as one might expect them to be depending on their purpose. There are some very delicately molded openings and raised details where appropriate. There are some antennas molded to one half of the fuselage and on one of the wings that will probably get broken off during assembly. I hate when they do that. Looking over the main air frame parts I did not find any noticeable flaws or defects. As near as I can tell most of the ejector pin marks have been kept out of visible areas. The gear bays have some structural detail and the wheels have a separate hub on the outside to make painting easier. The tires are not weighted. The engines have intake and exhaust turbine faces. The intake has what I assume is an adjustable intake cone ahead if the turbine blades. The exhaust end has after burner flame retention structure and tail feathers. The wing structures appear a bit complex with a top piece and two bottom pieces straddling the engines. There are separate parts for integrating the engines to the wings and separate ailerons/flaps. The wing tips also have a structure for enclosing the stabilizer struts. There are two complete vertical tail assemblies for different variants I assume but the instructions don't really give you much of a clue on which one to use. This is also the case with two canopies supplied. The two different nose cones are easier to figure out as they are shown in the marking instructions. There are also two different pitot tubes for each of the two nose cones, again, not clue as to which one gets used when.

OK, lets take a look at the parts. The first sprue had the fuselage halves and engine halves, the fuselage has separate nose and tail cones and there is a separate piece that fills in the lower 3/4 of the fuselage. The next photo shows a close up view of the surface detail on the fuselage. You an see the different sizes between fasteners and rivets and also the finely molded air intake. The next sprue, the largest of the group has the main wing parts as well as the upper engine covers and the horizontal tails. These are thin one piece moldings and it appears to be an all moving surface. Another close up view, this time the upper wing surface. The wing fences are molded as part of the wing, you can also tell how thin the trailing edges are as they appear translucent. The next sprue has the smaller of the two nose cones, the two different vertical tails and most of the cockpit parts. The long piece on this sprue is the bottom filler part for the fuselage. The balance are the missile parts and wing racks. And finally the longer of the two nose cones. The clear parts are thin and clear. One canopy has an upper frame work divider, the other does not, which was the only difference I could see on them. As you can see below there is very little optical distortion. The decals look good on the sheet, glossy finish, in register and thin. How opaque they are is difficult to tell. There is a lot of stencillings and it is all readable. Since it's all in Russian I have no idea if there are any spelling errors. The sheet provides makings for 12 aircraft, 6 with the long nose cone and 6 with the short. The only main difference between them is the nose number and all are in natural metal finish. One source indicates that the stars are wrong for the period of the aircraft. The instructions are in an A4 format booklet, stapled at the spine, 18 pages long. It contains all the information that most newer kits supply, a parts map, icon chart, safety warnings, it has a color chart listing colors by name and has a cross reference for Mr. Hobby, Tamiya and Model Master paints. It has ten pages of assembly diagrams with 29 assembly steps. Assembly diagrams are isometric line drawings and are large enough to not become overly busy. The one fold out page has the final assembly steps which would have been crowded if done on one page. There are 7 pages showing stencil and marking placement including the weapons and a load out chart.

My 2&cent; worth...In general this looks to be a pretty nice kit. I must admit I was drawn in by the box artwork and really didn't know much at all about a Yak-28 but I think it looks really cool, almost like an Me 262 on steroids. It's also one aircraft that would look better in the flying mode due to its landing gear configuration. The way the wing is constructed leads me to believe there will be some issues involving fit. I would have liked to do a test fitting but the way the assemblies are broken down it would be really tough to do. There is also a number of assembly options that really aren't addressed in the instructions and will require some references to figure out. This is also a fairly complex kit with 221 parts. So I would recommend it for experienced modelers.