For years I used a Paasche H1 airbrush, then later I bought a Modelmaster (Aztec) airbrush to replace it.  It never did so I went out and bought an Iwata HP-C.   After hearing the commotion Badger was causing with their new airbrushes at model shows, I contacted them once I saw a very nice discount offer from the company.  A couple of months after contacting them, I was offered the opportunity to review two of their latest airbrushes and this one is the first, the Renegade. 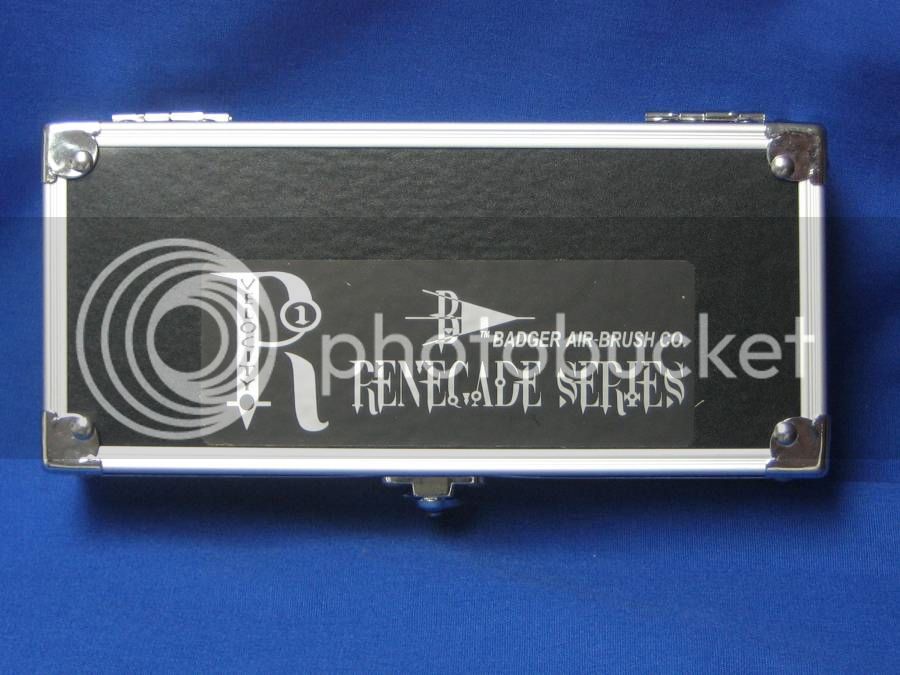 The Renegade comes in a fabulously made box, the kind a medal is kept in.  Open opening the latch; we see the airbrush, a plastic cup with two parts, both snugly held in place by a profile cut foam insert.  Lifting this up, we see the documentation included with the airbrush. 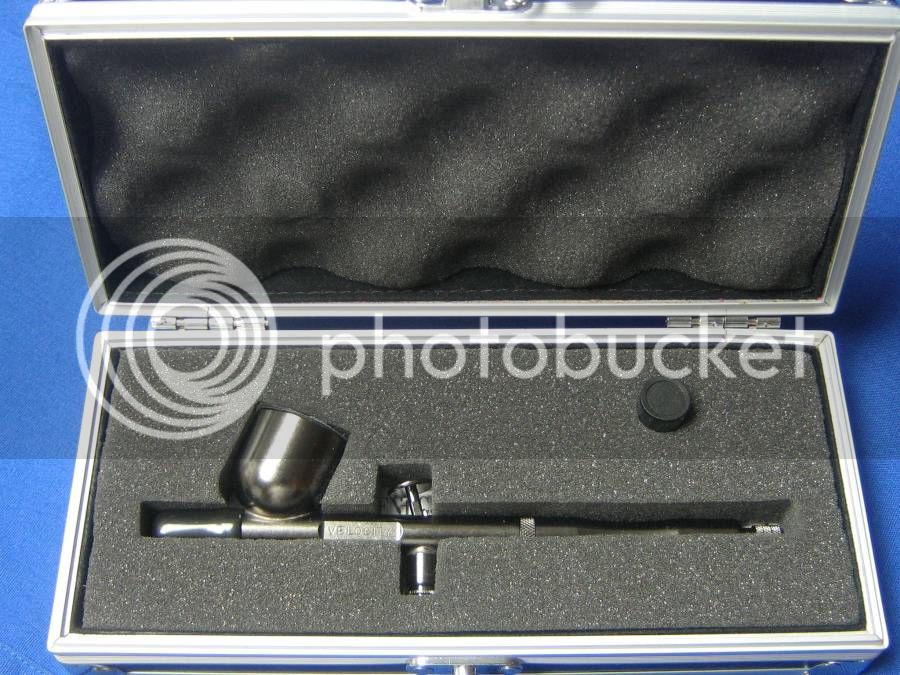 The tool is finished in a gun metal covering which is appealing but I won’t say the looks are impressive.  Taking it out of the insert, I noticed the top feed and went to look at the specifications.  It seems to be 0.25 ounce and comes with a plastic cap.  The airbrush feels a touch heavy but it is well balanced.  The needle also has a soft plastic cap. The previously mentioned plastic cup has a hose adapter and an alternate needle cap, more on that later. 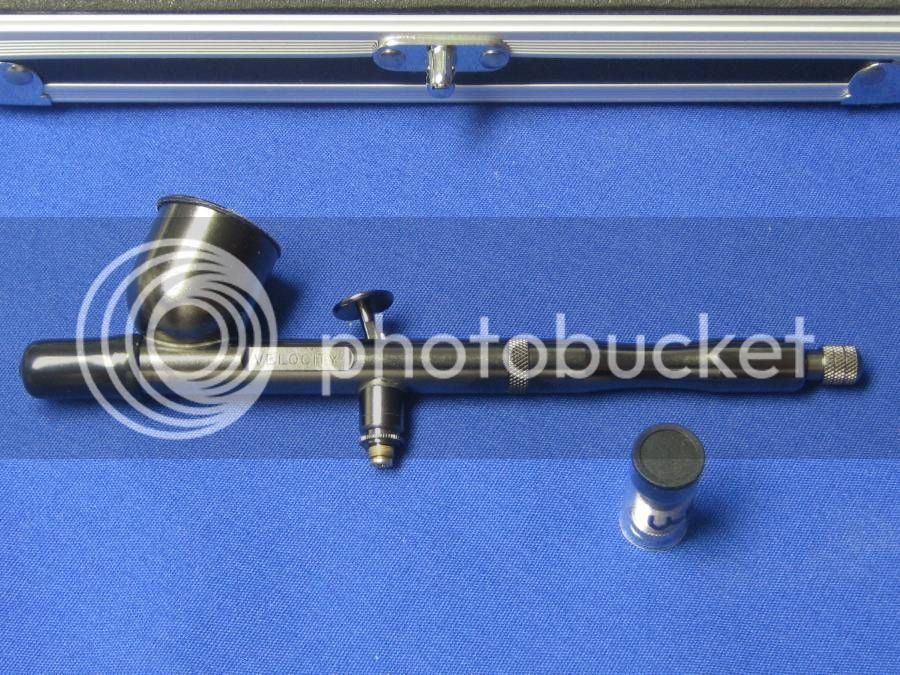 I went over to my workshop and grabbed a few bottles and a scrap kit.  With my main compressor out of commission due to a damaged gasket, I pulled out my back up, a Badger model bought at discount from Michaels Craft Stores.  I connected a hose with a moisture trap and set the regulator to 35 psi.  Some bee’s wax was added to the threads at the front and my ultrasonic cleaner was ready with solution for the clean up afterwards.
Using a dropper to fill the top loading cup with thinned Lifecolor paint with the consistency of ink, I tried a few lines, shades, and spots.  I found it necessary to drop the pressure down but the airbrush atomized the paint perfectly.  Any paint spatter was caused by my set up and not the tool.  It feels very balance, not as nose heavy as expected due to the cup placed over the brush.
What really impressed me was the trigger.  As a dual action airbrush, one presses down to increase airflow as you approach the spot to lay paint on, then pull back to increase the paint flow to be atomized.  At the back end, the knurled section allows one to stop the trigger to ensure duplication of paint flow and the lines painted with the setting. 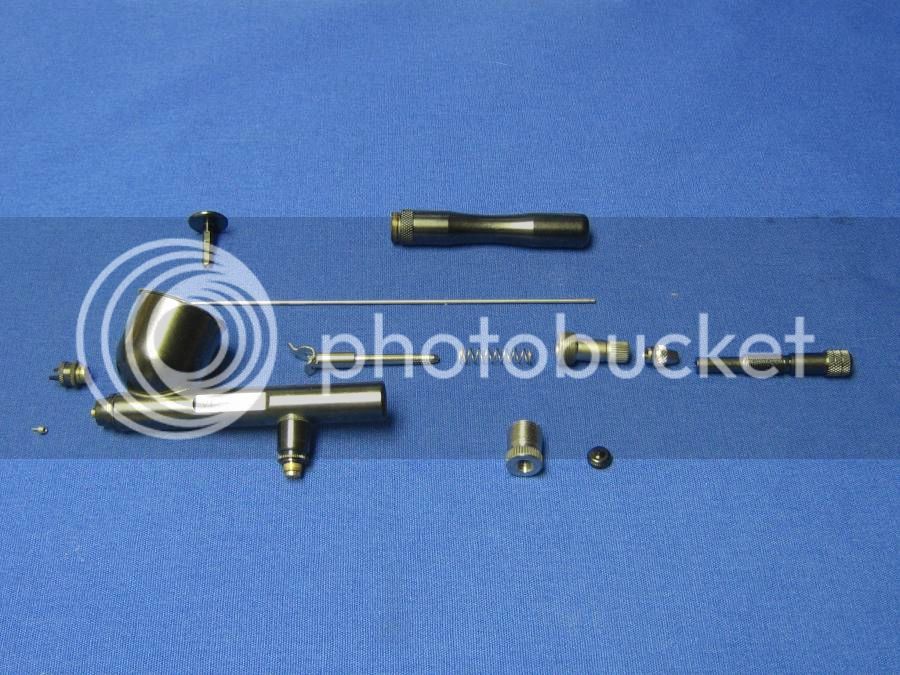 I cleaned the airbrush after taking it apart.  Heed the warning in the instructions as the nozzle/tip housing is not to be removed from the body as this voids the warranty.  My cleaning solution was Simple Green with a touch of Windex and Dawn dishwashing liquid.  A quick rinse and I re-assembled the brush using the alternate need cap in place of the double pronged safety cap.
This second cap leaves the needle exposed so I was a touch nervous as I did not look forward to the expense of a replacement.  Anyone with an airbrush knows that maintenance can get expensive on well-made tools.  Fortunately, replacement parts are FAR cheaper than the Iwata.
The needle is impressive as it slides into the trigger in a design which centers the needle assuring correct replacement.  It is 0.21mm and with the exposed cap I was able to get a very nice fine line without any overspray.  All this in a very cold workshop!  The specs mention a six degree linear flow angle.  Quite technical but I think this means that, coupled with the 0.21mm paint tip, tight lines are possible.
I tried spraying some shadow lines next to internal structural details of a model and it performed flawlessly.  I usually use a wash for this.
In conclusion,  this Renegade outperformed my other airbrushes.  At the time of writing, I have not tried Badger’s Patriot 105 but my plan is to keep using my Paasche for the large coverage, the Aztec for texturing, and this one for detail work.  The craftsmanship of the important parts of the tool is of a very high standard.  The price of the airbrush and the replacement parts are affordable plus I feel patriotic buying American.  My thanks go to Ken 'Badger' Scholtfeld for the sample and the incredible discount offer he presented.  You can visit Badger to get more information.