1/48 Italeri F7F-3 Tigercat
Yes, this is an oldie but I was curious to see what if any changes Italeri had made to it, and yes this is the kit that stigmatized an entire generation of modelers on the use of rubber tires. Based on the earlier Grumman XP-50 that was eventually canceled, the company developed the XP-65 (Model 51) further for a future "convoy fighter" concept. In 1943, work on the XP-65 was terminated in favor of the design that would eventually become the F7F. The contract for the prototype XF7F-1 was signed on 30 June 1941. Grumman's aim was to produce a fighter that outperformed and outgunned all existing fighter aircraft, and that had an auxiliary ground attack capability. Armament was heavy: four 20 mm cannon and four 50 caliber machine guns, as well as underwing and under-fuselage hardpoints for bombs and torpedoes. Performance met expectations too; the F7F Tigercat was one of the highest performance piston-engine fighters, with a top speed well in excess of the U.S. Navy's single-engine aircraft &mdash; 71 mph faster than a Grumman F6F Hellcat at sea level.
All this was bought at the cost of heavy weight and a high landing speed, but what caused the aircraft to fail carrier suitability trials was poor directional stability with only one engine operational, as well as problems with the tailhook design. The initial production series was, therefore, used only from land bases by the USMC, as night fighters with APS-6 radar. At first, they were single-seat F7F-1N aircraft, but after the 34th production aircraft, a second seat for a radar operator was added; these aircraft were designated F7F-2N.

The next version produced, the F7F-3, was modified to correct the issues that caused the aircraft to fail carrier acceptance and this version was again trialed on the USS Shangri-La. A wing failure on a heavy landing caused the failure of this carrier qualification, too. F7F-3 aircraft were produced in day fighter, night fighter and photo-reconnaissance versions.

Marine Corps night fighter squadron VMF(N)-513 flying F7F-3N Tigercats saw action in the early stages of the Korean War, flying night interdiction and fighter missions and shooting down two Polikarpov Po-2 biplanes. This was the only combat use of the aircraft. The F7F-3 was the most numerous version built with 189 aircraft built.

The Italeri kit is not new, its roots go back to a release by AMT/ERTL in 1995 and it was released in several different boxings until 1997. In 2007 Italeri pick up the ball and re released it under their name and again in 2016 with new decals. They didn't bother to redo the badging on the sprues a they are still embossed with the ERTL name. The original kit was released about the same time as their A-20 kit and from a level of detail and quality is very similar to that kit. Considering its age it still can hold it's own detail wise. The first release of the kit managed to stigmatize an entire generation of modelers against the use of rubber tires on models. What ever compound AMT/ERTL used had the effect of melting any plastic it touched over a period of time. In spite of the fact that there have been few if any reports of newer kits with rubber or vinyl tires causing any issues many modelers still either avoid them or put a protective layer between the tires and any plastic parts to which they are attached.
The kit comes in an average sized top open tray type box of thin cardboard. The kit parts pretty much fill the box. Inside the box one finds three sealed plastic bags. One large one with four sprues, one large one with the fuselage halves and engine nacelles, two medium sized ones with the wings and tire halves and one small one with two bombs and the engine cowlings. One medium sized bag with three medium sized sprues with the balance of the kit parts. A third bag contains the clear parts. Good news for all is that the tires are now molded in styrene !
The parts are molded in a medium gray color and feature mostly recessed panel lines with recessed fastener detail. The panel lines are actually quite fine for the time and certainly equal to or finer than some found on newer kits. There is some raised detail where applicable. In spite of the age of the kit the molds appear to have held up well with only a few spots of flash here and there. Mold separation lines are about average indicating good mold alignment. The only surface anomalies I found were some very light sink marks on the outer fuselage in the area where detail is molded on the inside. This could easily be considered oil canning if you are not inclined to fill. There are ejector pin marks, the most annoying in the center of the cockpit side wall detail although as narrow as the cockpit it they might be difficult to see. They also exist in the nose gear bay side walls and the main gear bay side walls. Again they will not be that visible when assembled.
The fuselage side walls as well as the gear bay side walls have molded in detail that should satisfy most modelers. The cockpit is fairly basic as were many kits at the time this one was released. A floor, rear bulkhead with separate seat, joy stick and instrument panel. Seat belts and shoulder harness are supplied as decals as is the instrument panel. The instrument panel features recessed instruments with clock details and various raised knobs and dials which look like they would be challenging to get a decal to fit over. If you are so talented it would look really nice painted up.
The engines have completely molded front and rear cylinder banks with fine fin detail, push rods and separate gear cases and ignition harness for the front. The propellers are one piece moldings and nicely done. One in my kit had some molding debris on one blade that will need to be cleaned up.
The landing gear are rather complex but nicely molded and feature molded on brake lines.
The tires are molded in halves with nice tread detail. The hubs are separate and nicely molded making paining easier.
Eight rockets are provided as are two bombs for under wing stores. If you intend to either of these the wings need to be drilled out before assembly. The instructions on show drilling the holes for rockets. The kit also supplies an center line fuselage drop tank. The rack for this is molded on one of the fuselage halves. A boarding step is supplied to attach to the fuselage. The wing mounted guns are separate parts but the fuselage mounted guns are just molded into the gun recesses. No mention is made of adding a fuselage weight to prevent tail sitting but a 55 gallon drum with a box on top of it is supplied to hold the tail up.

OK, lets look at the parts...
First up are the fuselage halves and nacelle halves. The top antenna is molded to one half, never a good practice in my opinion and on mine it didn't survive the review process. 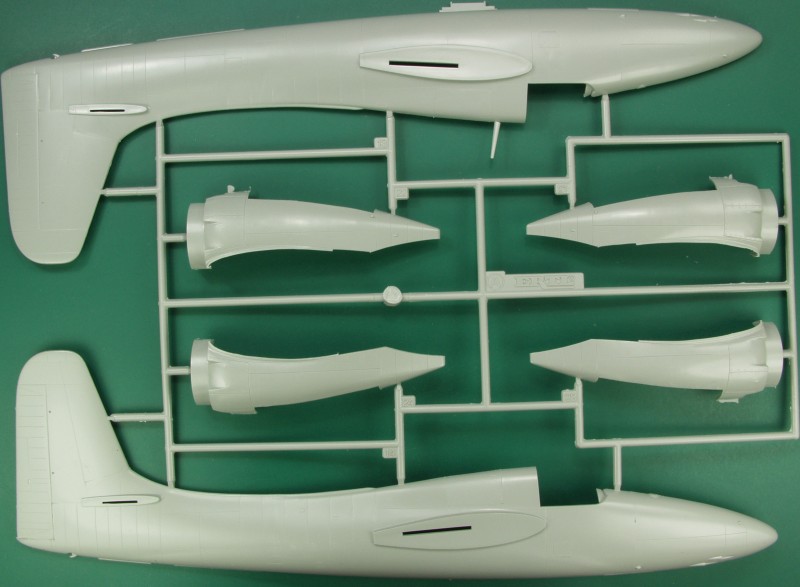 The next two photos show the molded on detail in the fuselage and nacelles. Note the prominent ejector pin marks. Wings and tires next, there are two of these sprues. The next small sprue has the bombs, two gear strut parts and the cowlings.

The next two sprues both have the horizontal stabilizers and props but the balance of them feature a variety of parts. Photo shows the back side of the forward nacelle parts with the engine exhaust stubs. These would benefit from being drilled out a bit. The clear parts are reasonably thin and clear but does have some optical distortion. 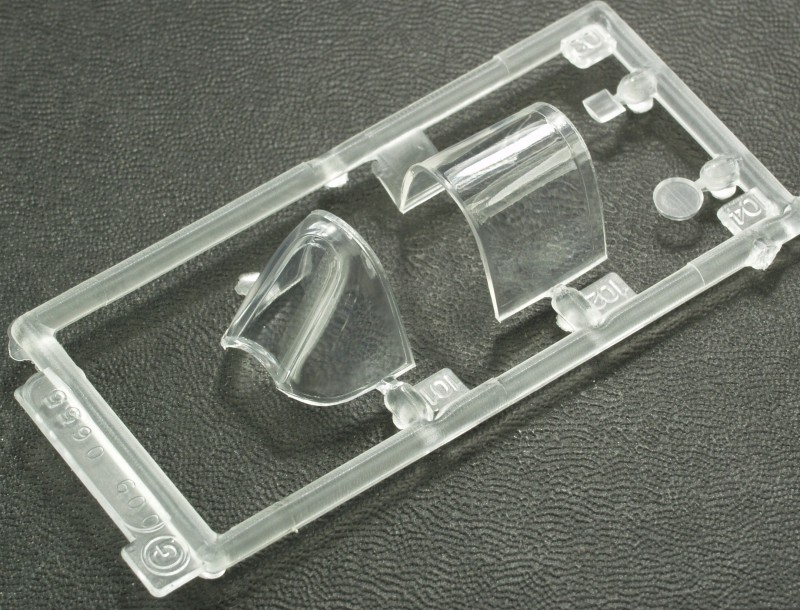 The decal sheet is huge nearly filling the bottom of the box and contains markings for 6 aircraft, all in overall blue. The sheet is nicely printed, in register, glossy and at least on the sheet appear opaque. This is sometimes hard to determine on white and light colors. Excess film has been kept to a minimum where possible although the large combined numbers and letters would probably be better cut out and applied separately. The sheet is printed by Zanchetti Buccinasco or so it says on the sheet. A new name to me. Markings are for the following aircraft: U.S.M.C., MAG-33, Phoang, Korea, 1953;
U.S.M.C., MAG-33, VMF-312, MCAS El Toro, California, 1946: U.S.M.C., VMD, Oakland, California, 1946; Naval Air Station Livermore, California, 1946; Naval Air Station Anacostia, Washington DC, 1950; U.S.M.C., VMP-354, MCAS Cherry Point, North Carolina, 1949. A note concerning the markings, the first one listed and the last two listed are F7F-3P photo reconnaissance aircraft and the kit does not have the camera doors which were located on the lower portion of the aft fuselage. This kit reminds me a lot of the AMT/ERTL A-20 kits, done at about the same time. It's a relatively simple kit, nicely detailed and most reports indicate it assembles reasonably well. The most challenging part will be finding room for enough weight to keep it from being a tail sitter. For now it's the best (and only one) in this scale.

As always, thanks for looking !