In 1937, the Polikarpov design bureau carried out studies to improve on the performance of its I-15 and I-15bis biplane fighters without sacrificing maneuverability, as Soviet tactical doctrine was based on a mix of high performance monoplane fighters (met by the Polikarpov I-16) and agile biplanes. Early combat experience from the Spanish Civil War had shown that the I-16 had problems dealing with the Fiat CR.32 biplanes used by the Italian forces supporting the Nationalists, which suggested a need to continue the use of biplane fighters, and as a result, Polikarpov's proposals were accepted, and his design bureau was instructed to design a new biplane fighter. Polikarpov assigned the task to the design team led by Aleksei Ya Shcherbakov, who was assisted by Artem Mikoyan and Mikhail Gurevich (who would later set up the MiG design bureau).

The new fighter (designated I-15ter by the design bureau and I-153 by the Soviet Air Forces (VVS)) was based closely on the design of the I-15bis, with a stronger structure, but was fitted with a manually retractable undercarriage to reduce drag. It reverted to the "gulled" upper wing of the original I-15 but used the Clark YH aerofoil of the I-15bis. The four 7.62 mm PV-1 machine guns of the I-15bis were replaced by four ShKAS machine guns. While still rifle-caliber weapons, these fired much faster than the PV-1s, (1,800 rounds per minute rather than 750 rounds per minute) giving a much greater weight of fire. The new fighter was to be powered by a Shvetsov M-62 an improved derivative of the Shvetsov M-25 that powered the I-15 and I-15bis with twin superchargers.

The aircraft was of mixed metal and wood construction, with the fuselage structure being based on chromium-molybdenum steel with duralumin skinning on the forward fuselage, and fabric covering on the fuselage aft of the front of the cockpit. The aircraft's wings were made of fabric covered wood, while the tail surfaces were of fabric covered duralumin. The aircraft was fitted with a tailwheel undercarriage, with the main wheels retracting rearwards, rotating through 90 degrees to lie flat in the wing roots, being actuated by cables operated by a pilot-driven hand wheel. The solid rubber tailwheel did not retract, but moved in conjunction with the rudder.

The I-153 first saw combat in 1939 during the Soviet-Japanese Battle of Khalkin Gol in Mongolia. The Japanese Army Air Forces' Type 97 Fighter (Nakajima Ki-27) Nate proved a formidable opponent for the I-15bis and I-16, but was more evenly matched with the I-153, which retained agility inherent to biplanes while featuring improved performance. While the overall I-153 performance was satisfactory, some significant problems were revealed. Most troublesome was the absence of a firewall between the fuel tank mounted in front of the cockpit and the pilot. Combined with strong draft coming in through the wheel wells, fuel tank fires invariably resulted in rapid engulfment of the cockpit and severe burns to the pilot. In addition, the M-62 engine suffered from a service life of only 60&ndash;80 hours due to failures of the two-speed supercharger.

The ICM kit comes in a medium sized box, fit for the scale and size of the kit. The box features a thin top which when removed reveals a hinge top box made from thin corrugated card board. Inside the box one finds a large resealable cellophane bag containing three sprues and inside that a smaller bag with the clear parts. The kit is molded in a light gray color and the parts have a smooth matte finish. The parts are virtually flash free with only a hint being found here and there. Mold parting lines are moderate showing reasonably good mold alignment. The aircraft is almost entirely fabric covered and the fabric detail has been handled quite nicely. What little is metal covered features recessed panel lines and fastener detail. There is some raised detail where applicable. I found no surface defects on my kit and ejector pin marks have been kept to places not easily seen when completed.

The cockpit is reasonably well detailed as the actual aircraft was rather simple. The cockpit consists of a two part seat, stick and rudder pedals. a frame work is built up with additional parts that mount to it including the instrument panel. This assembly then mounts to the floor surrounding the seat. The fuselage side walls have a little structural detail molded on and a couple additional items are added to that. While more detail could be added, not much will be seen through the small cockpit opening. The control panel has both raised and recessed detail and a decal is supplied for the instrument faces.

The lower wings are molded with one piece bottom and separate tops and the top wing has a single piece top and separate bottoms. The control surfaces are all molded separately. The engine assembly looks quite nice with a separate push rod casting for the front and intake manifold on the rear side needing only some wiring to make it complete however very little of it will be seen unless you leave the cowling side pieces off. The landing gear wheels are in halves and not weighted. The gear doors have some nice structural detail molded on the inside.

The kit comes with an assortment of bombs and rockets to mount on the wings although not all of the marking options could carry them. Being a biplane the kit does need rigging and the instructions have some vague diagrams as to where it goes but more detail would be helpful. OK, lets take a look at the parts. The next sprue has the upper wing halves, control surfaces, engine and front and rear cowling and a few other misc parts. 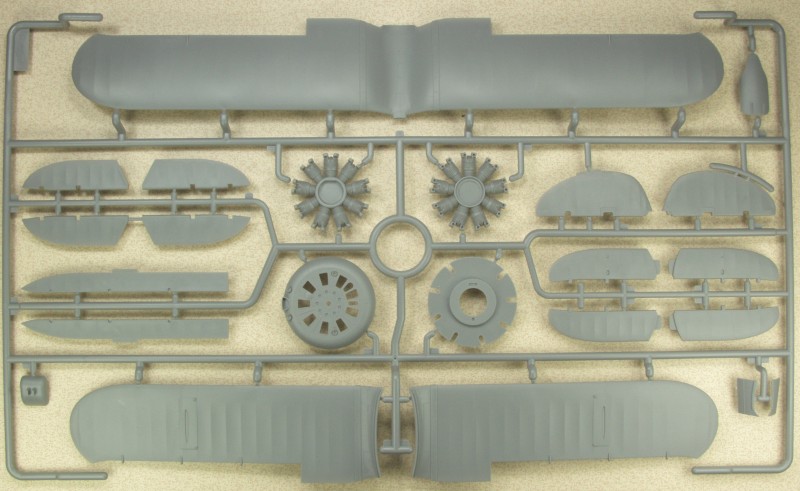 And the last gray sprue contains everything else, weaponry, cockpit frame parts, engine parts, landing gear parts and a host of details. Some of the detail is quite petite like the internal cockpit framing and care will be required when freeing it from the sprues. 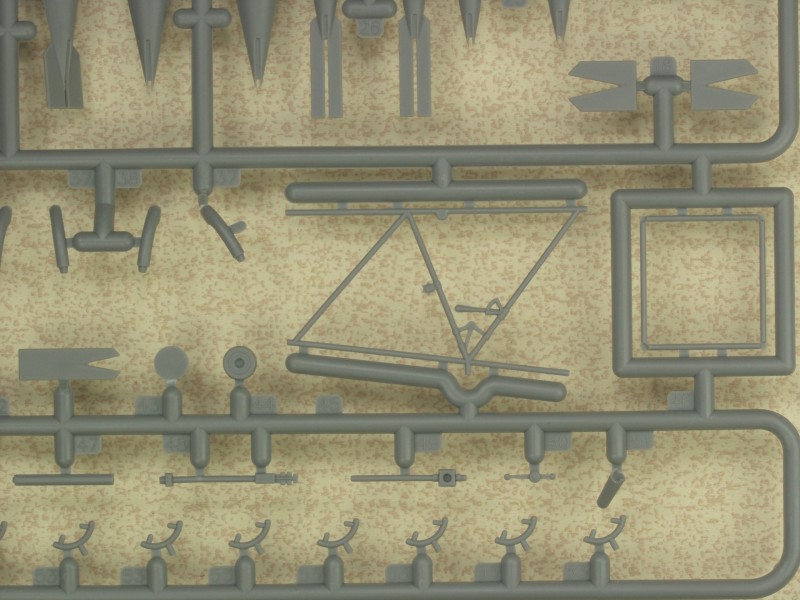 The clear parts consist of the windscreen, two inspection port covers that allow the pilot to see if the gear is up in the wheel wells, two wing tip and one rudder navigation light lenses. The windscreen is thin, quite clear and free of distortion. The decals are thin, glossy and are in register. Not easy to tell how opaque they are especially the white numbers. I have had mixed luck with ICM decals and the last ones I used seemed impervious to Microsol. The sheet contains markings for four aircraft, One all aluminum color, one with green squiggles over aluminum, one green over light blue and one green and black over light blue.

The instructions are printed on glossy paper in a 16 page A4 size booklet stapled at the spine. The cover has a brief history in Russian and English, a color chart with Model Master and generic color names and an icon chart, pages 2 and 3 are a parts map, pages 4 through 13 are the assembly drawings in isometric style with a few halftone drawings, page 14 has a halftone drawing of the completed model and a rudimentary rigging diagram. The last two pages have painting and marking instructions in color.

Some builders have noted that the landing gear parts are a bit fiddly to assemble and appear the be a bit weak to support the model long term. Aerocraft Models has come to the rescue with a set of replacement struts in a one piece lost wax brass casting that are drop in replacements and feature superior strength. The parts are quite nicely detailed and require little to no clean up. I have not acquired them yet but they are on my list. The parts can be seen here

This is only ICM's third foray into 1/32 scale, the first being an I-16 and the second a Bucker Bu 131D. ICM has made great strides in their quality in all there kits over the past couple of years to the point it is difficult to consider them as a limited run kit manufacturer. One still needs to build them as you would a limited run kit doing a lot of test fitting but if you haven't built one of their newer kits you should give one a try, I think you'll be pleasantly surprised. The kit is getting good reviews elsewhere and seems to go together with few difficulties.