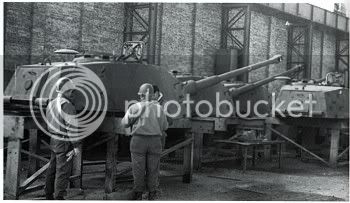 A final Tiger picked up by 510 direct from the Henschel factory - March 29 1945 that is a mix of parts and has been destoyed in battle . Late war experimental vehicles and 1945 production mix-ups and rush jobs interest me a great deal and I love to consider the options around manufacture and paint with these subjects. They keep my modelling intersting for me, as well as pushing my boundaries and helping me develop further as a modeller. In considering the approach to such subjects I came accross a method that I like for Red Primer. After the King Tiger subject that I will be refering to, I began my 17cm Grille and continued to develop the method. Both vehicles are Red Primer based but involve other colors with this base coat. I hope that I can interest readers and help with one way of doing a Red Primer scheme and touch on the ideas and techniques around painting late war vehicles......... this is only MY way of doing things and certainly not the only way to achieve a satisfying result.
In the final stages of the war in Europe, the German war machine's admin system was falling apart and orders were often put on hold or intergrated, as retro fitted parts were run out and new ones then used. We see this often in tank variants at a time of cross-over to the next model and it was certainly 'rife' amongst the Luftwaffe production chain. I felt a nice paint job, and one that would be a bit topical, would be a Tiger 2 produced during this period from a damged one . One of the KTigers picked up by 510 could well have been a fix up, with new paint etc. I also doubt whether all these tanks were painted the same with the circular marks and dark yellow - the paint job looks very rushed, almost like the unit had applied the lighter color. So I took this idea and ran with it as a lead in to my 17cm Grille and to experiment with the Red Primer look.
I have gone with this idea, creating a late model Tiger 2 with a new, as yet unpainted, Red Primer turret, fitted to a used chassis, that has been 'fixed -up' with a 'hastey' overspray of green over the new solid Red Primer base (applied earlier to the chassis), when it first came in for repair - this would have made it a Jan/Feb build chassis, which matches my 'mods' to the model. The turret has just been 'grabbed' off the line, outside the factory and put on the chassis to get it out the door [without applying the green basecoat].

Red Primer for a battle veteran
My tank is set a couple of months later, the paint has been damaged and is already coming off the chassis through battle damage and weathering by May '45. This will be a knocked out vehicle, so the weathering will be reasonably heavy.
I base coated the tank in Tamiya black acrylic then gave it a ruff , light overspray with Tamiya RED Brown. Make sure that this is a light ghost coat as you want a darkish effect that is not a solid color. (Please excuse the photo's here as the lights were too bright and took out my color and contrast to a certain extent.) I next added a more definate coat of Pollyscale Panzer RED Brown - but still patchy (still water based). Emphasise certain areas more than others by making the color a little more consistent. Stay away from the edges and keep the darker shades coming through. Hard edges at this stage look good (also) and can be easily achieved with a piece of straight edged card. Hold this along the edge on the side you dont want the paint to go on and this will give you a degree of varying modulation (as it is now coined). If you have an exposed engine make sure that it retians it's black base throughout the process. This can be detailed at the end. Next I added the maskol to cover the Red Brown areas I wanted left sharp, then oversprayed with Tamiya Black Green. I applied this coat in an uneven way to simulate a hastily done dark background base. When doing this kind of thing, think of what might have been available for repair at the time and what they might have been used from older spares or available vehicles returned to the factory earlier. I followed the order issued in late november 1944 for armour components to be painted in Dark Green as a factory base coat, with Red Brown and Yellow to be sprayed over this. This was meant to come into effect on 1st March 1945.
The green was done with Tamiya Acrylic Black Green, again ghosted in lighter and darker patches to achieve a badly applied weathered look for the base. Leave some areas of the RED PRIMER base coming through by not directly spraying. Also utilise masking and 'soft masking techniques to get chipped and exposed areas that appear different to the ghosted areas left exposed. This way you will achieve a realistic variation of the Red Primer showing through the green. Further weathering at a later stage will link all of the parts together. 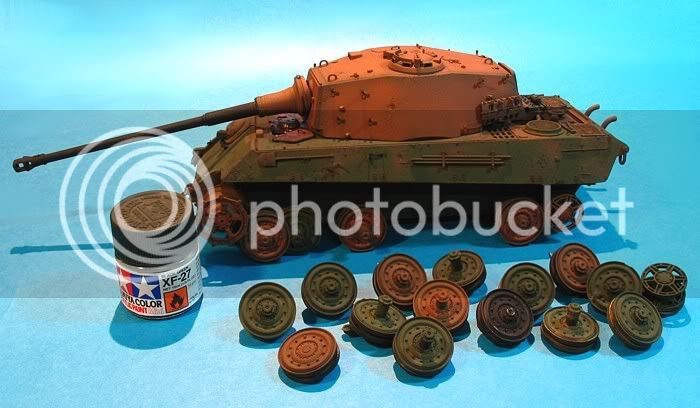 Next stage is the damaged and faded green that I will have to make a new post for as I have reached the limit in this part. I will be back with part 2 ASAP.