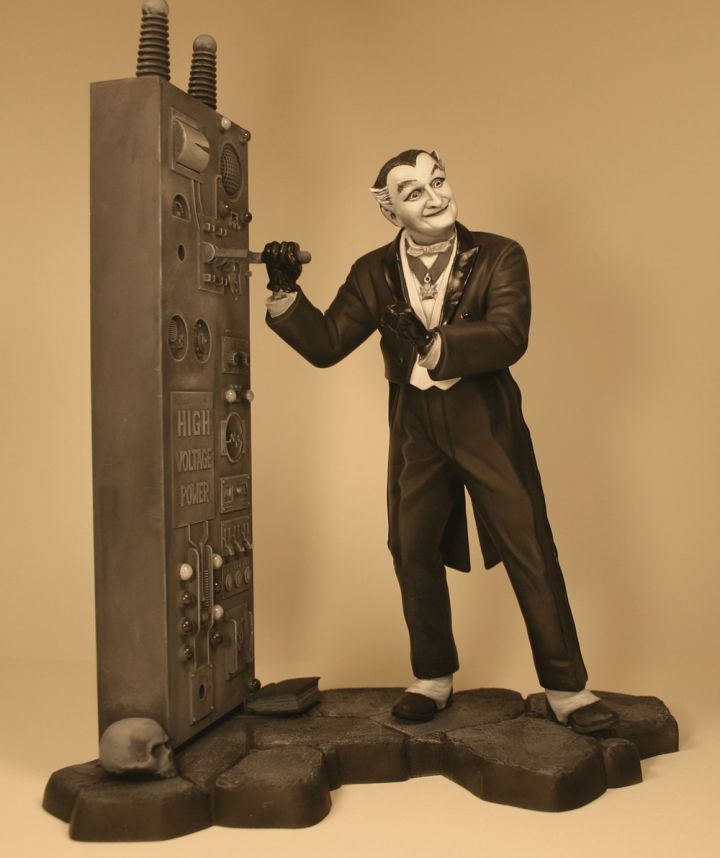 Ausf, (Jeff Matthes), has been a member of modeleralliance.com for 5 years. I had noticed his postings and his talent in building armor. However, he really got my attention with his incredible, realistic personality sculptures. there are a lot of sculptors out there, but, 25 years of running The VLS Corporation had made me keenly aware that only a tiny few were capable of sculpting likenesses. A very rare talent. Just a single example is his MA Icon, Karl-Otto Alberty, the German actor we have seen in so many war movies such as Kelly’s Heroes, The Great Escape, The Devil’s Brigade, The Battle of the Bulge and many others, whose image was captured dead bang on by Jeff.

His modeling career started at age 5 with an Easter gift of Aurora’s Demolition Demon, a model kit that featured a banged up jalopy which rocked his world (He still remembers opening the box, 47 years later). For the next decade or so, all his allowance and lawn mowing money went to Aurora Monsters or later on Monogram 1/48 air craft. His Christmas gift each year would have be a large Monogram, B-17, B-52, etc. He has great memories of building kits on Saturday afternoons while listening to an episode of World At War or a “B” Sci Fi movie on the black and white TV. Like most, discovering girls and music shifted his priorities and scale modeling took a back seat until years later. While shopping for trains for his sons, he happened across a 1/72 DML Tiger I and he was immediately brought back to his youth, Laurence Olivier’s voice echoing in his head. In a short amount of time he was building 1/35 scale armor, amazed at how the quality of kits and at the level of detail in kits had evolved.

As an adult, he primarily built WWII armor, starting a small side business making modeling tools and importing aftermarket products under the company name of Ausfwerks. After a while, on a dare, he began sculpting which eventually led him even further back into his childhood, now focusing on Universal Monsters, 60s TV and 50s “B” movie subjects.

When he wasn't modeling, he has been lucky to make a living with some sort of art field: ranging from music, film makeup effects to fine arts framing as well as working as a professional dive master which brought him to some of the most beautiful places on earth.

He was born and raised in New York City and currently lives about 60 miles North in the Hudson Valley. He has been married to his wife, Lynn for 20 years, has two sons (one away studying engineering, the other on the verge) and a Silver Lab named Easy.

I am proud to Introduce a new Master’s member, Jeff Matthes. (Ausf). Jeff will no doubt be another asset to our Master’s Forum.