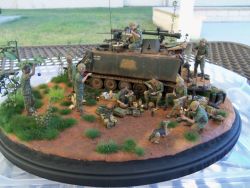 James was born in 1970 as an Army brat. His interest in models began at around the age of 5 when his father built him some buildings and made a large layout with an airfield so he could play with his Roco Minitanks, Matchbox Cars, and Model Planes. Shortly thereafter, he built some of his own models with the help of his dad. When he was 9 years old, he entered his first model contest with some 1/72 Airfix figures and a Roco APC in a diorama. At that point he was hooked on military modeling and was inspired by pictures he saw in magazines like Military Modeler in the early 1980s. His interests in Vietnam War subjects began at this time as he learned more about his father's service in Vietnam. His first IPMS show was Modelfiesta in San Antonio in 1983 where he first met Alex DeLeon who is a member of the Masters on Modeler's Alliance. Although he built a few vehicle models, he was primarily a figure and figure diorama modeler.

Growing up as an Army brat, James developed a passion for Military History which went hand-in-hand with his modeling efforts. Shep Paine, Francois Verlinden, Bob Letterman, Chris Mrosko, Brett Avants, Doug Cohen, Bob Bethea, and a few others were inspirations for his modeling. Upon graduation from High School in 1988, James served 8 years as a Reconnaissance Marine in the USMC-R while attending Texas A&M University majoring in History. Several deployments interfered with school and modeling so he had to take a break from those periodically until he joined the US Army as a Light Infantryman with his first duty station being Fort Wainwright, Alaska where he had lived when he had his introduction to modeling back in 1975. While stationed in Alaska and being frustrated by there not being a local hobby shop until almost the end of his tour of duty there, he started his own on-line Hobby Shop business specializing in Vietnam models and special orders for the members of his model club. After being stationed in Texas and becoming a part of the Active Guard/Reserve force (AGR), he continued modeling and attended his first figure shows. Unfortunately, he had to take a break from modeling again due to multiple deployments to Iraq and Afghanistan. This also resulted in the closing of his Hobby Shop business. After recovering from some head injuries, he started modeling again in 2010 and was pleased to find that the hobby had evolved quite well and there were more figures on the market that were of high quality. In 2012 he deployed to Afghanistan for the last time bringing some materials for sculpting and figure conversions with him for him to work on during his down time. He wasn't able to start working on anything until February 2013, but did manage to sculpt three figures and convert a few others before returning to the US. Upon return, he was assigned to a Warrior Transition Unit at Fort Sill, OK for several surgeries. Between surgeries and therapies, he continued to follow his passion of modeling and ran a Art and Modeling Group for WTU Soldiers to help them with their fine motor skills. He also had the opportunity to intern as a Museum Exhibits Specialist at the Air Defense Artillery Museum where the Museum's Director was also a modeler. He joined the local club and ventured into Armor modeling for the first time. He made several models for the museum and helped with the 1/35th scale conceptual model of the new facility being built to house the new Air Defense Artillery Learning Center. When the WTU at Fort Sill closed down, he was transferred to the WTU at Fort Hood, TX where he he continued his internship at the !st Cavalry Division Museum until he retired from the US Army with over 28 years of service (20 years of Active Federal Service and 8 of USMC-R and TXARNG Service) and 15 deployments under his belt. He feels that his service has helped him create realistic atmospheres and tell effective stories with his models.

I am proud to introduce Jame’s O’Leary as a new member of The Master’s Forum.