Overview Discussion
THIS PROCESS WILL FOLLOW ALONG THE LINES OF THE SMALL BASE BUT WILL INVOLVE MORE RUBBLE AND DIFFERENT COLORS AS WELL AS SOME VEHICLE PLACEMENT ISSUES TO WATCH OUT FOR.

STAGE 1
Pick a building that you would like to place with your vehicle, keeping in mind that if it is to big it will overpower the scene and be unbalanced. If it is to small it will fall victim to the vehicle and you will have the same result in reverse.

The building I chose for this particular scene was the old VP kit of the ruined church. SEE BOX PHOTO BELOW. FORGET THE SCENE ON THE BOX AND EXPAND A BIT MORE[/b]. Let your imagination work rather than just doing what someone else has done and you will will get more enjoyment and probably end up with a better ‘personel ‘result.
Construct the base to a plan. I experiment with a piece of square card and the models involved. They don’t have to be completed, just tape up the hull and turret etc and this will give you the basic size. I also have a box of old unpainted figures that I use at this stage to help plan how many and where. The shapes don't matter at this point, just as long as you know what you want in your head, just let the figures represent that.
Place all the pieces on the card and work out how big it needs to be. Don't forget the building

. Adjust the base as needed until you have a squarish shape that fits all your pieces and has a 'balanced unbalance'. I know this sounds crazy but it is the key to what you are after with small and medium sized dioramas. The real skill is learning how to place everything so that it compliments what you are trying to show. Some tips for this are......
• Tall at the back – this would apply to your building.
• Your tank or vehicle in the middle.
• Low wall at the front or some other small piece of visual interest.
• A lamp post can work at the front as long as it is skinny and is joined to the rear in some way(as in the shot below). Like via a power line for instance. This works but it is harder to pull-off and it depends on your subjects. This can be applied in many different ways.
• Never set your detail out in even quantities, as this doesn’t look natural but contrived.
HERE IS AN EXAMPLE OF USING A LAMPOST AT THE FRONT.
.......................... 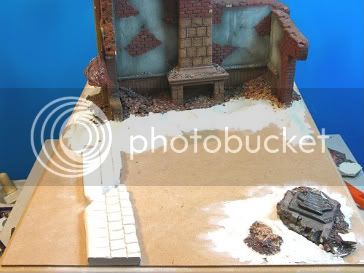 Now its time to make a wooden base and stick down your groundwork and building. I use a mix of white glue and water plus a touch of detergent so that it will flow over the ground work and not be held up by the surface tension. Please refer to my small base blogg. So this is what you have at the start. Nothing much to look at but it should still feel right and convey your detail and TEXTURE. YOU CAN TELL IF IT WILL WORK EVEN AT THIS POINT. SOMETIMES WHEN i HAVE PAINTED A BASE i LIKE IT SO MUCH THAT I DON'T WANT TO COVER IT UP WITH A VEHICLE. I rescribed the outer detail to make it more 3d and added interior detail, through scribing, to the inner walls. I also added broken stain glass window pieces cut from the VP release and cast up more broken pieces of rubble from the original.
....... YOU CAN SEE THE DETAILS AS WELL AS THE RESCRIBED INTERIOR. YOU CAN ADD SCRATCH BUILT STUFF TO YOUR HEARTS CONTENT. I BUILT A BROKEN WOODEN DOOR BUT I COULD ALSO HAVE ADDED WOODEN SEATS FROM THE CHURCH, UNDER THE RUBBLE.
..... I had to balance the rubble effect with reality so I went for somewhere in between. Not too much , hopefully ....just enough for visual effect without overpowering the scene. Too much rubble can wreck the whole thing.
I added some stairs as well. This can be really fun and very enjoyable. I enjoy this kind of basic detailing of bases as much as building the vehicle that goes on to it.
........................... Now that the ground work has been established and glued down , it's time to decide on the colors. I wanted the church to be gothic grey with a touch of color to offset the large walls. This would also work well in contrast to the tri color Tiger1 that I planned to use.
................. 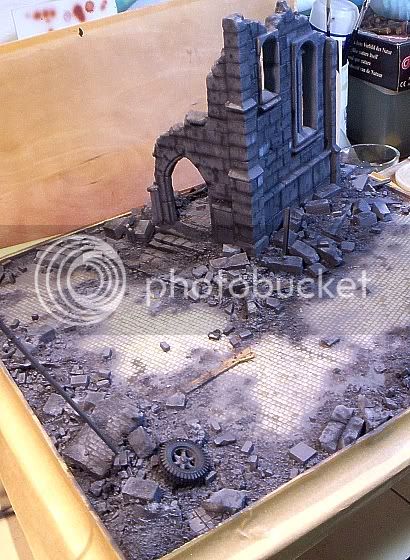 -Then I sprayed straight German grey but only in the middle of all shapes and objects, leaving the crevaces and edges dark.

WARNING - there are no short cuts for a quality base. This is a long and detailed process and I know not everyone likes to paint - especially groundwork, but you can get some great effects to match your vehicles with the same satisfaction if you look at it in the same way as your tanks.
I also oversprayed these crevaces and cracks again with Tamiya acrylic black to re-establish their promenance for the rest of the process.
...... I then added some ghosting on selected rubble pieces and bricks with a lighter acrylic grey. Don't do too much as it will ruin the effect.
The wooden edge is also masked off for painting and will stay this way until all groundwork paint has been applied.