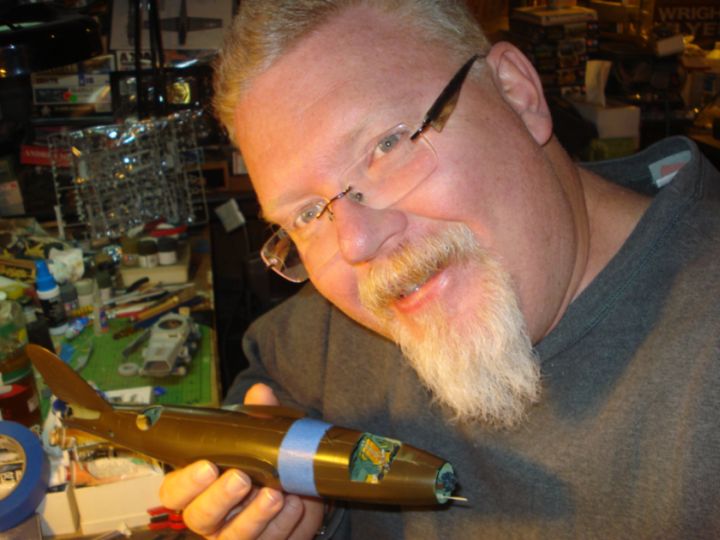 I first met Terry Barrow at Mastercon 6 in 1997. Then later in Moscow Mills, Missouri in the VLS conference room. He had came from his home town of Clinton, Missouri with his wife Mary for a meeting with the late David Harper who worked for me at the time. He returned several times and we had some joint ventures going. I have visited Terry and Mary in both Clinton as well as in Kansas City where we share the love of a restaurant called Jack’s Stax and their unbelievable Barbecued Burnt Ends.


Terry was born on January 17, 1963. He built his first model at age seven. It was a P-36A by Monogram and Terry says it cost seventy five cents, that was three weeks allowance in those days, and he still has it. He has built models on and off ever since. He doesn’t really have a favorite kind of model, if it looks neat he may build it.

He lean toward armor, but has done just about every type of model. He became serious about modeling in the 1990’s when he entered his first model contest at the local hobby shop (90 miles away in Kansas City, Missouri). He received a second place and has been addicted ever since. He is never really satisfied with his work, always thinking he could have been done better. (He has a lot of company there). He always seems to be amazed by the work of others I guess that’s what keeps pushing him to improve.

Terry believes that if you stop trying to learn new modeling techniques you might as well stop modeling. He have learned a lot from the modelers he has been around and owe them a lot. To pay them forward he is always ready to help other modelers even though he’s always a little embarrassed when someone asks. He tells them “Oh it’s really not that hard or I couldn’t do it”. He has received quite a few awards, but he still has goals. He modestly says he is just a regular modeler that’s been lucky a few times.

He was elected Eaglequest Grand Marshal in 2013