I only recently met Giovanni Azzara’ 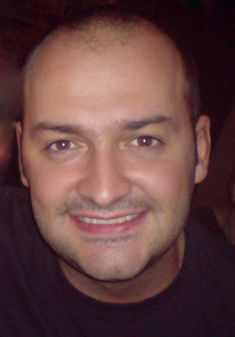 I was looking through the figure forum and saw this incredibly well done. I began looking at all this figure painter’s work and was very impressed. I should have been. I contacted him and invited him to become a member of the masterclass.

Here is his modeling biography!

Born in Potenza, in southern Italy in 1975, his beginnings in modeling began with his set of “Legos”. He soon discovered modelling thanks to his dad who brought him a set of German figures from Italeri, which he soon transformed into an African-American basketball team, playing on a side street basketball court. Basketball was and still is one of his passions. Since then he has built planes, helicopters, cars and motorbikes (another of his great passions).

In the early nineties, Giovanni attended university in Pavia, and it was there he learned about Milliput, He bought some and made his first scratch built model, "The Crow" from the famous comics and movie, and he still has it in his home collection. Later, he met many talented people who introduced me to the military figure world, and he started to enter competitions, winning a few prizes here and there.

Then, Giovanni met his, at the time, partner in crime and still very good friend, Danilo Cartacci, with whom he started a collaboration that led him to win gold medals at some of the most important shows around the world. From the World Expo to the Euro Militaire, to SCHAMS, Chicago MMSI, Seillans ,and even a best of show in St.Vincent, to name a few.

He was doing the sculpting while Danilo was doing the painting. All this lead him to meet some of the most amazing painters and sculptors around, and with some of them, he created various pieces that are now the hands of collectors all around the world.

Then he took a break and decided to finish his university studies. He wanted to acquire an education that would enable him to earn a living at something maybe not as amusing as military miniatures , but necessary for survival! That also meant a moratorium in my modeling for about 5 years.

Giovanni moved to London and then in July 2008 moved back to Milan, Italy.

Last year he finally decided to get back to modelling and here he is again, painting figures mostly, also learning how to build AVF's and soon he'll begin getting into those! I have been communicating with him frequently. He is very modest and humble for someone with so large a talent.

It is my pleasure to introduce Giovanni Azzara’ to the Master class forum!

G
how to photograph your figures
0.00 star(s) 0 ratings